You Read My Mind: An Experiment to Test the Destiny of the World 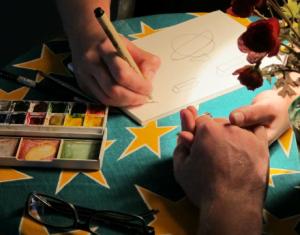 Writing about people you have worked with (but perhaps more importantly, enjoyed working with) can often be an exercise in self-restraint. Unfortunately, like most artists who have interacted and/or collaborated with Lauren von Gogh and Robyn Cook, the two Joburg-based co-founders of The Sober & Lonely Institute for Contemporary Art (SLICA), I find the instinct to be border-line evangelical about them overwhelming. And, considering their track record, I don’t think you could blame me. Since formally establishing the initiative just a few years ago, the two have produced a slew of unusual and funny works, hosted many blitz 24 hour residencies (including my own in late 2012), and curated an exhibition that featured, amongst other things, butter churning classes.

The institute’s first incarnation was during Von Gogh and Cook’s student days at the Wits School of Arts. Cook, a former art director who already had a degree in information design and Von Gogh, who had dropped out of her architecture degree, bonded over being “the oldies in the class, with the shared distinction of waitressing for a living.” The pair began to collaborate under the name Sober & Lonely, a moniker inspired by their similar emotional states and life-styles: “We were both in long distance relationships, and were pretty lonely. We had also been jointly sober for a few years (for very different reasons),” they explain. The idea of long-distance connections developed into a running theme in their work – in the final year of their BFAs, aware that they might soon be parted, the collaborators became interested in what they describe as “more pseudoscientific subject matter.” My first encounter with the pair was during a performance around this subject matter, where they attempted to communicate telepathically with each other through a thin cardboard barrier (to almost no success, although I suppose that really depends on how you look at it).

After graduating, the difficulties of negotiating the local art scene/s drove the two to try turn what had been initially conceived of as a varsity experiment into a functional platform for both themselves and other artists. “There are few alternatives to the commercial gallery systems, and even fewer platforms that offer forums for fluidity and malleability within arts practice, or for lively, informed encouragement,” say Von Gogh and Cook. “So, starting SLICA seemed a very natural progression; combining both our interest in collaboration, and our need to address what we perceived as deficits within mainstream art practice. There seemed to be a need for ‘space’ that allowed for art that was potentially ameliorative, humorous, imaginative and revelatory.”

SLICA, who were already producing and facilitating work on a shoe-string budget, took their thriftiness to a whole new level when they decided to use a house that they were minding during its renovation as the location for their residency programme. “It was meant to last a few months, but we landed up having the space for two years (the builder was very, very slow). It was huge, and we had extra space. So the obvious thing to do seemed to invite others to share it.”

The programme became quite malleable, shifting through what was often a literal open house policy, with some artists working there for a month and others popping in for a day. “We have had some great work produced, but I think here it is important to emphasise that the process is the most important thing,” clarify the two when asked about the programme. “Often the end-result bears no resemblance to the initial proposal. And we are happy with that. There is never really a final showing of the work, but more often an event, talk or braai where the artist can engage with people if they want. The idea of experimentation is important; a test-site for people who might then expand the project, or see it as a failure and leave it behind.”

In 2013, SLICA presented a group show called An Experiment to Test the Destiny of the World. “We never thought of it as our first official exhibition, but rather the most appropriate way to execute a project in that space. The Ithuba Arts Fund invited us to use their big, newly renovated gallery space with no budget, which we are pretty good at managing now’” they laugh. “Many of the artists [invited to participate] suggested group projects, interactions or activations at the site. We see these as an extension of our artistic practice, where the interchanges between ourselves and the artists involved, as well as the work produced, is positioned as an on-going experiment in interactivity.”

Later in the year, the two traveled to the Netherlands and stayed at Friesland’s Kunsthuis SYB, where they hosted a sort of satellite version of their latest residency programme, The Sober & Lonely 24 Hour Springtime Residency with students from Academie Minerva in Groningen and Amsterdam’s Rijksakademie. The international group produced experimental projects around “pancakes, queer rap, and the universe,” explain Von Gogh and Cook.

After returning home, they plan to host a residency about 60kms outside of Joburg in August of this year, before searching for a more permanent home for the institute. “We are looking specifically for a lighthouse in Johannesburg. Or an old Fire Station (let us know if you hear of anything!). And we will be building a teleportation device at GoetheOnMain at the end of the year,” they add, nonchalantly. “And in 2014 we are launching the Sober & Lonely School, an alternative arts education platform that, while focused on the arts, will explore a variety of multi-disciplinary avenues including (but not limited to): hiking, entomology, star-gazing, papier-mâché, light and colour in the outdoors, and of course – telepathy.”

Story by Genna Gardini, poet and playwright completing an MA in Playwriting at UCT