A take on 3 Portraits By Ashraf Jamal 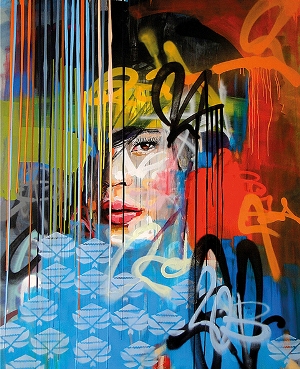 “Future-retro” is the add-on attached to the street art and indoor wall-work – or paintings – by Kilmany-Jo Liversage. Like all good descriptors, it’s catchy, accounting for the endgame of contemporary art where everything’s been done and what we are left with is the recurrence of the same. Sounds cynical, but this view, famously punted by Arthur C. Danto, makes sense in a globalised hall of mirrors in which everything goes; everything meshes with everything else in a graded blur.

Hailing from Bloemfontein – the “city of roses” – Kilmany-Jo Livesage’s personal definition for what she does is “visual funk”, a fall-out from Motown, but also a state of mind which, in the 21st century, conveys ennui, exhaustion, or a bluesy narcotised languor. To be in a funk also means to flinch, shirk, then find oneself caught in the doldrums.

Looking at Kilmany-Jo Liversage’s paintings, along with her recent street art commissioned for the 55th Venice Biennale, doesn’t suggest, to me at least, anything funky – which is also a descriptor for something that stinks. Instead, there’s an electrified vitality to the work; a crazy bling over-the-top quality that reads as excess, an ear-splitting loudness or harsh glare. After Jean Baudrillard, this is work that’s visible … all too visible: designed to nuke the hang-over of penetrative insight; keeping things on the surface, and, on that surface triggering a fuselage of fire-crackers. Liversage’s work, literally, explodes. Its pop affect – flat portraiture check-mated by jagged bolts of kinetic colour – captures the psychedelic noise of the current moment. 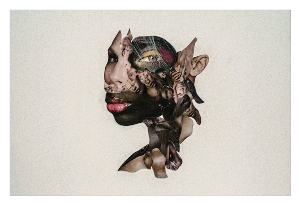 Vitshois Bondo, a Congolese artist currently resident at Gallery Momo where he recently opened a solo show titled Rethinking the Future, shares a love for all things abrasive. When I visited his Momo studio I was struck by a floor thickly strewn with shredded Elle magazines; Doric columns of unopened shrink wrapped glossy wads at the ready. “Painting, sculpture, photography, and installation,” define Bondo’s force-field; his “belly full of objects of consumerism.” Once again, it’s making sense of excess that matters. Bondo: “I try to turn things my way; the concerns and hopes of my current reality. Seeking to experiment with the hybrid nature of my artistic reality in search of a new and truly nomadic reality.”

These are big ideas which provide a face, and a body, to Bondo’s weirdly morphed figures. Wangechi Mutu springs to mind, and with it the throwaway magazine culture with its airbrushed fantasies of beauty and luxury which the artist cuts up, a la David Bowie, producing a novel rethink and retooling of a glutted media-sphere.

“My technique of using cuttings to compose figures, bodies, portraits and heads is a way for me to recreate the human body and construct a new society and to question the multiplicity of races and the various challenges arising from this multiplicity. The body is mutilated and chaotic, confronting us with the anarchic situation reflected in current political and socio-economic trends in Africa and worldwide.”… These words, surely, evoke a Francophone headspace, with all the giddy seductiveness of a mind plugged into the grand condition human so distasteful to a circumspect Anglophone mind.

But Bondo does capture a drive in contemporary art that is committed to the big picture. As Neil Blomkamp, the director of District Nine, Elysium, and the forthcoming Chappie – starring Ninja and Yo-landi Vi$$er – reminds us: “If you’re not somewhat political or observant, I’m not sure you’re an artist. I’m not actually sure what you’re doing.” Pro Die Antwoord’s “insanity,” Blomkamp’s hard-edged moral vision is something Bondo shares. His paper trail is a clue to a conspiracy. 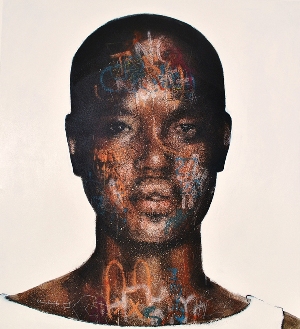 Like Kilmany-Jo Liversage, Capetonian, Dion Cupido, is fixated on what he calls “African-pop portraiture.” Unlike Liversage, Cupido’s images are muted, distressed, bleached. Both artists belong to the World Art stable, operating as rabbit-holes into the present.

If Bondo is captivated by the big idea, Cupido, like Liversage, triggers a private emotion. Cupido caught Beyoncé Knowles’s attention when, averting the glare of the paparazzi on Church street, Cape Town, she slunk into the World Art gallery, drawn by the quiet dun-coloured world of Cupido’s art. This is speculation on my part, but Beyonce certainly bought one of Cupido’s Afro-pop portraits – was it the one of Alec Wek?

My point is, with his love of industrial ink Cupido has conjured a taste for seductive and subtly scrimmed portraits that suggest the latticed booth of a confessional. A kind of visual sonar, Cupido’s paintings act as a faint reverb to Liversage’s noise. As a team they show very well together; and if Bondo amps the big idea, then Cupido suggests that “putting too much intellect in a work can also take away from it.”

Of his painting of Alec Wek, Cupido has this to say: “I use an image of a very popular model, a supermodel, she is larger than life; her face is all over the media. She is without doubt one of Africa’s most beautiful women but for me this painting is not about creating an image with a strong likeness. I dig deeper. I colour over the lines transcending the icon, the glossy, photoshopped, flawless, out of reach cover of a magazine women to someone more familiar, to something I believe we have lost touch with.”