The appeal of glass lies in its ancient mystery, its liquid translucence and its elemental changeability, and what was once seen as simply a craft is increasingly being recognised as an art form in its own right.

“Among the many thousands of things that I have never been able to understand, one in particular stands out,” wrote Bill Bryson. “That is the question of who was the first person who stood by a pile of sand and said, ‘You know, I bet if we took some of this and mixed it with a little potash and heated it, we could make a material that would be solid and yet transparent. We could call it glass.’ Call me obtuse, but you could stand me on a beach till the end of time and never would it occur to me to try to make it into windows.” 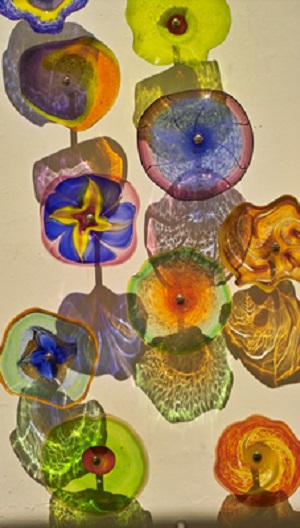 I share Bryson’s awe at the magical material that is glass, but it’s not simple windows that so intrigue me. It’s the works of glass art: from multi-coloured solid, functional pieces that still speak of malleable liquidity, to fantastically intricate and fragile light-filtering spirals and orbs, to abstract sculptures that seem to have been plucked from an abstract parallel reality that’s a hybrid of oceanic splendour and primordial celestial ooze.

Liz Lacey of Red Hot Glass, a Venetianstyle glass-blowing studio and gallery at The Spice Route wine estate, adjacent to Fairview wine estate, just outside Paarl, calls glass “nature’s fourth dimension”, and looking at the work designed by her and made by glass-blower Henk Nel on the premises, it’s not hard to see why. (What is hard to fully comprehend, though, is that this ancient craft, one of the oldest on earth, dates back to the first century BC.)

Liz explains that she began her career as a graphic artist, but when she came across a glass-blowing studio while travelling through Canada, she was instantly drawn to the medium. It was not the hard, finished product, though, that interested her. It was the hands-on aspect of holding molten glass on the end of a stick, plunging it in and out of a 1300 degree furnace, and tweezing, shaping and coaxing the alive, flowing redhot material – literally bending it to her will and imagination.

Liz’s work ranges from glass art sculptures to platters, bowls, ashtrays, perfume bottles and vases, and her pieces have been exhibited in galleries around the world. But, is it art or craft? Visit the gallery and decide for yourself.

This is not quite what happened. It is thought that the discovery of glass manufacture was far more serendipitous than that. The story most often told is that a group of Phoenician traders transporting nitrum on their boat stopped at a beach, where they prepared a meal. Not having stones to prop up their cooking pots, they used lumps of the nitrum, which fused with the sand, became liquid and then set into glass.

Glass is a more healthy and ecoconscious choice than plastic. The manufacturing of glass generates 100 times less toxic emissions than plastic and using glass drastically reduces the chances of chemical contamination from the container. What’s more, the life-span of glass is far longer, because it can be recycled up to 30 times.

To see the work done at Red Hot Glass or to have work commissioned, visit: http://www.redhotglass.co.za/