Can City: Smelting Waste To Art On A Street Corner 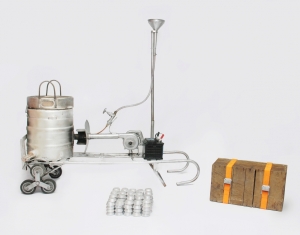 The city of Sao Paulo, Brasil, has nearly 20 million inhabitants, all trying to make a living despite a challenging economic environment. In this context, large amounts of waste are generated on a daily basis.

However, due to the many struggling inhabitants in the city, all desperate to make a living, more than 80% of recyclables are collected by informal waste collectors known as Catadores.

Can City is a design project implemented by an locally based, internationally recognised design studio known as Studio SWINE (Super Wide Interdisciplinary New Exploration) that seeks to empower the Catadores to add extra value to their collected recycling.

The innovative design solution is a mobile smelting unit that runs off waste cooking fuel and burnable materials, conceptually allowing street collectors to melt down and mold old cans into value added products.

In the designer’s words:

“Where the majority of carbon cost is in the transportation of goods rather than their production – ‘Can City’ explores the possibility of industry returning to our cities, using free metal and free fuel to produce an endless range of individually crafted aluminum items adaptable to customisations and able to ‘cast on demand’.”

Watch the beautiful video below to see how their crazy contraption works!

Can City from Studio Swine on Vimeo.