By Cormac Cullinan and Melissa Baird

On 22 April 2010 the Universal Declaration of the Rights of Mother Earth (the Earth Rights Declaration) was proclaimed by the more than 32 000 participants in the People’s World Conference on Climate Change and the Rights of Mother Earth held in Cochabamba, Bolivia. This pivotal event has created an opportunity for people around the world to take the lead in addressing the key challenges of the 21st Century and prove that regardless of what governments do, global organisations and communities will make the 21st meeting of the Convention of the Parties of the United Nations Framework Convention on Climate Change ( COP 21) a success by signing a People’s Convention to establish an International Tribunal for the Rights of Nature.

The formal establishment of the Earth Tribunal is an important next step in the process of developing systems of governance designed to ensure that humans live in harmony with nature. The more organisations and individuals that show their personal and professional support behind the tribunal process, the greater its authority and the more effective it will be in exposing the need for far stronger and more creative international responses to our pressing environmental problems.

“You never change things by fighting the existing reality. To change something, build a new model that makes the existing model obsolete.” ― R. Buckminster Fuller

Article 9 of the draft People’s Convention for the Establishment of the International Rights of Nature Tribunal provides that “the convention may be signed by representatives of a nation, tribe or other traditional group of indigenous peoples, any organisation that wishes to promote the effective implementation of the rights and duties in the Earth Rights Declaration in respect of a specific geographical area or areas, or any specific being such as a river, or species; or any local community.”

This means you can endorse the international tribunal in your personal capacity and lobby organisations and communities to become signatories to a Peoples’ Convention that will formally establish the Tribunal here.

In Paris on the 4th and 5th December this year, the International Tribunal for the Rights of Nature will hear a wide-range of environmental legal cases covering issues like megadams in the Amazon, mining, oil and gas exploitation and responses to climate change that further commodify nature and attacks on those who defend their part of the earth.

The Tribunal judges are highly experienced and respected individuals from many continents and represent many cultures including indigenous people, who base their decisions on the Universal Declaration of the Rights of Mother Earth which was adopted on 22nd April 2010.

This is our unique opportunity to unite with people and organisations around the world to start creating a world that focuses on regeneration of the Earth’s resources and people. 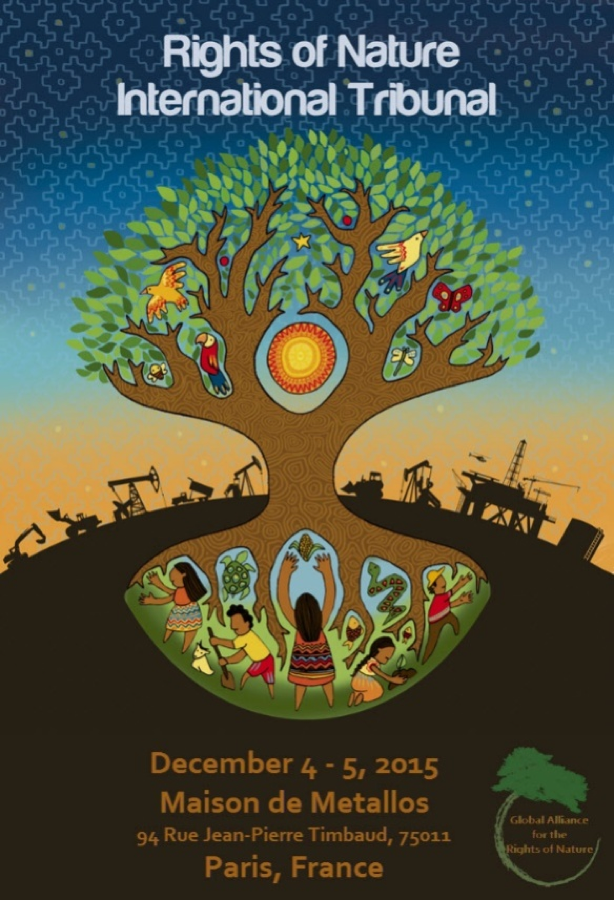 “Successfully addressing climate change and healing the damage which industrial civilisations have done to Earth will require more than new technologies and market mechanisms.  It will require a fundamental transformation of our relationships with Nature.  We are not the masters of Earth, entitled to dominate and exploit her “natural resources” for our own selfish ends, but privileged participants in a wondrous and sacred community of life. Bringing about this transformation and creating viable human communities that live harmoniously within the Earth community will require committed and concerted action. The Universal Declaration of the Rights of Mother Earth calls upon each of us to embrace our kinship with all the beings of the Earth community and to recognise, respect and defend the rights of all. Now is the time to answer that call.”