Five swims in Antarctica.. 1 Reason campaigning for the establishment of Marine Protected Areas 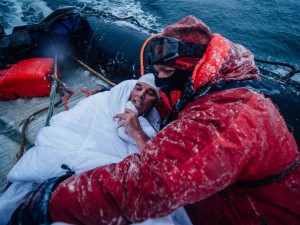 ewis Pugh continues to rock records and draw attention to the fragile marine eco-system that are being ravaged by over-fishing, oil prospecting and man-caused oil disasters,  rising ocean temperatures and climate change. His latest super-human achievement was to complete five swims in the Ross Sea that was once home to thousands of Antarctic blue whales but now only 3% of the original population survive. He is Patron of the Oceans and in this mission to raise awareness of the need to create Marine Protected Areas has found an audience in Russia who are key decision makers in this process.

In the land of Antarctica, making use of Shackleton’s early base Lewis has swum the five seas of Campbell Island, Cape Adare, Bay of Whales ( you cannot swim any further south on the map)    Peter 1 Island ( in the Bellingshausen Sea and one of the remotest islands on the planet) .to have the Ross Marine sea declared a marine protected area.

In formidable conditions, Lewis broke the World Record by completing his swim in -1.7 degrees C water – the coldest seawater can be before it freezes – 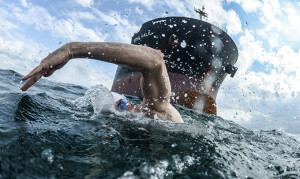 with no insulation other than a swimming costume. Why would he do such a thing? In his own words “The Ross Sea is a place I care deeply about. It’s the most pristine ecosystem left on our Earth, with wildlife found nowhere else, and of vital importance to science. But it’s now being destroyed by industrial fishing.Our generation is driving species to extinction, irreversibly altering ecosystems and leaving our children with a planet that is unsustainable. We can change that.Please urge the 25 CCAMLR nations, responsible for protecting Antarctica’s ocean, to set aside the Ross Sea as a Marine Protected Area forever.”

The organisation responsible for creating MPAs in the region is the Commission for the Conservation of Antarctic Marine Living Resources (CCAMLR), which is currently chaired by Russia. Lewis is asking the general public to show their support for the cause on Twitter using the hashtag #5swims and help him to raise awareness to protect this site before it is too late.