The ocean is an abundance of natural wonders: coral that one could liken to diamonds (they are so hard), volcanic rock activity rumbling deep beneath the water, a kaleidoscope of fascinating marine life, and of course the ocean’s own garden: seaweed. There are over 9000 species of seaweed that span across the world’s oceans; some of which are edible, while others are used for herbal medicine or fertilizer compost for landscaping. Similar to hemp, the uses of this underrated, durable plant are extensive; going beyond a facemask or the wrapping of sushi, something which two 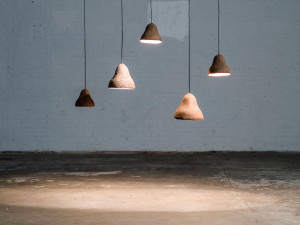 Danish designers fully embraced when they created a unique collection of chic furniture that is made from nothing more than seaweed and paper.

The project began as an investigation into using local materials, as designers Jonas Edvard and Nikolaj Steenfatt,  (both masters holders from Royal Dan ish Academy of Fine arts) wanted their objects to reflect the essence of the Danish landscape, most of which is dominated by seas making Denmark almost completely surrounded by water. The North Sea, the Skagerrak, the Kattegat and the Baltic Sea all enclose the various coastlines of Denmark, while one of its most iconic landmarks includes the little mermaid statue in Copenhagen.

In order to create these objects, the designers used fucus seaweed, a type of algae they harvested by hand from the Danish coastline, to create the Terroir chair and lamps. Fucus seaweed is the brown seaweed that is often found washed up on beaches around the world. In Scotland and Norway, up until the mid 19th century, this seaweed was harvested, dried, burned to ash, and further processed to become “kelp,” which was a type of soda ash that was less costly in Britain than the barilla imported from Spain. It also contains alginate; a naturally occurring polymer which when dried and mixed with a bit of glue can be incredibly durable. Additionally, despite what wet seaweed may smell like on this beach the high level of salt in focus acts as a natural preservative, ensuring that the furniture doesn’t have a sell by date.