In the wake of Greenpeace Africa’s campaign highlighting the impacts of burning coal to produce electricity on the respiratory health of residents living in close proximity to caol fired power station, it appears as though Greenpeace are barking against thunder as Eskom continue to duck and dive in a bid to postpone its responsibility to adhere to the requirements of the National Air Quality Act of 2015. 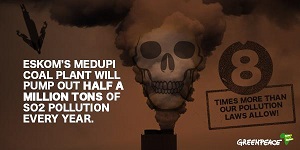 The crux of the issue is that Eskom believes that abiding by the law and curbing their emissions would cost too much, which can be seen as a bit ironic given that former CEO Brian Dames took home a salary of R5.7 million in the last financial year (that’s R21 000 a day) before he resigned in December last year (amid a vast number of important upgrades and projects worth billions of rands).

Greenpeace estimates that the number of deaths per annum in South Africa due to air pollution is as many as 2200 (about 10% of who are small children). Air pollution emissions that come from coal powered stations are especially dangerous as certain emission by-products include the likes of mercury, a potent neurotoxin that harms the mental development of children. 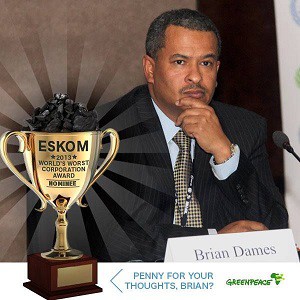 At the same time, Eskom has managed to run up a debt of R225bn (essentially a quarter of what SARS collected in revenue during the last financial year). Although given the intense cost pressures as a result of delays and budget overruns on its two new coal-fired power stations, Medupi and Kusile, it is not surprising. It seems such a waste when this amount of time and energy (no pun intended) could have been used towards efforts in developing renewable energy sources, such as using our 2000km of coastline to harness wind power.

Original information and facts sourced from: