What happened at COP17?

This was the first climate change conference I have attended and I had mixed expectations about being there. Would this turn out to be a fiasco of international proportion or would there be some real collaborative action in taking steps towards cleaning up the planet, reducing deforestation and actively seeking renewable energy resources as a solution for powering a world population that is now over 7 billion people? 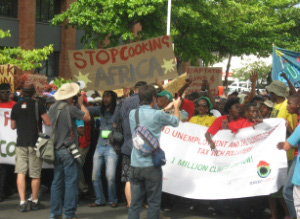 The environmental activists renamed COP 17 as the “Conference of the Polluters” and created a charmingly funny sticker that turned the logo of COP 17 – into a juggler’s hat. The Occupy movement set up camp on a grassy mound surrounded by traffic and dug a little peace garden while painting banners. One slogan that struck a chord was “ Nuclear power is inter-generational tyranny”.
The 3rd December marked the global day of protest and over 8000 protestors gathered to voice the concerns of civil society. Why is it that energy innovators and gardeners have the solution to powering the world economy but governments and big corporate are doing everything they can to hold on to what is left of their power base? But it is easy to criticise and as difficult as it was for the negotiators to reach consensus even the protestors could not reach agreement and there were some very heated disagreements as to who should lead the march. While this was going on business delegates and government officials were stuck in air-conditioned rooms trying to work out a solution for managing climate change.

The politics of the battle is incredibly complex and while there is celebration that there has been another commitment to the Kyoto Protocol – there are no binding action points that have to be taken until 2020. Essentially this means it is business as usual – although there is nothing usual about the current economic forces at play, nor the environmental degradation that comes as a result of our reliance on fossil fuels.

The buzz words were all about carbon – carbon capture, carbon storage, carbon sequestration and for the lay person the science of carbon and how to manage it can be boggling and open to much debate – depending on who is paying for the research.
What is not difficult to understand is that we all have a role to play in cleaning up our place in the world and this is where conscious living and being a conscious customer can impact change.

The whole economic chain is about supply and demand and if, as customers, we can demand products that observe best practise – in farming, in its water footprint and its waste recycling as well as what energy is used to fuel its creation we can positively impact change for the better. We cannot rely on a top down approach. Where in history has a government made a decision that has impassioned its people to change – usually it is the people who overthrow outdated systems that enable change then to take place from the bottom up.
Am I any wiser about the ‘fight for climate justice’? All I know is that this conversation has been going on for 17 years and will continue. It also seems to me that this is a conversation about world political stability and a fight between those that have and those that don’t. This is nothing new either. We are aware that the minute resources dwindle or are cut off you will have a population on the brink of unrest. The total lack of moral integrity of the big polluters as they continue to plunder what resources are left is staggering to behold and the power they wield is quite unnerving. Why do we enable this to continue by buying their products?
Only individuals can change and collective action of like-minded people can make a difference. I do believe the tide is turning against corporations and governments who are plunderers rather than good administrators and decent corporate citizens of this planet. It is just a matter of time although there is debate as to how much of that we do have – to make a change for good.