I used to own a car. I drove a cherry red 1969 Mini Panel Van that I loved dearly (some of the time). My dad and I bought it in Bloemfontein and drove it all the way back to Cape Town, restoring it together over months. In the four years that I owned my Mini I had countless breakdowns, unforeseen expenses, and a near empty wallet. I had to work to make money to afford the petrol to get me to work. I remember sitting in my car in traffic, fuming with frustration, revving my engine (which was also fuming in its own way), getting grumpy and annoyed with everyone around me. I even remember getting angry at pedestrians and cyclists, as if they were doing me, a driver, an injustice just by daring to use MY road to get around. 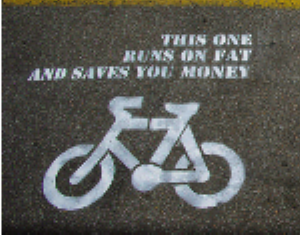 I sold my car two years ago. Occasionally I do miss it. My sound system, my surfboard racks, the ability to travel vast distances without thought, and that beautiful cherry red paint job. At the time it was a financial decision, and I wasn’t too happy about letting it go. These days though, I get where I need to go by bicycle or public transport, and I love it (most of the time).

I interact with the real world, not from inside some exclusive capsule, but face to face with the buildings, streets and people that I used to fly past without noticing. I work less, I play more, I smile more while commuting. I especially love zipping past cars that are stuck behind one another in traffic, taking shortcuts, and noticing all the finer textures of our society that blur from behind a windscreen.

I often pull up at traffic lights and see people inside their capsules looking out at the world with scowling eyes, their foot riding the clutch, and their bodies completely removed from the land they are travelling and I consider myself lucky. Lucky to be exercising, releasing endorphins, saving money, enjoying myself, and relying on my own body to take me places.

And I’m certainly not the only one feeling this way. Around the world governments, companies, and most importantly, common people, are latching on to the idea of commuting by bicycle, and the trend is growing rapidly. Governments are seeing an opportunity to decrease emissions, ease overburderned transportation systems, and increase public health. Companies are noticing higher productivity and concentration amoungst employees that get regular exercise, and as for people- common people like you and me- It seems to just make sense. You save money on petrol, parking and car servicing, improve your health, enjoy yourself, miss traffic, meet people, and even help reduce your impact on the environment. It’s a no brainer really.

Now I am not saying that you have to become an extremist. You don’t have to sell your car, or swear off petrol. By all means, you can if you want to. But you can also start slowly. Take out your old bike from the garage, dust it off, oil the chain and go for a spin. Feel the wind in your hair, smell freshly cut grass and baked goods, smile more.

I understand that in today’s world of massive suburban sprawl we cover large distances to get to work, or to the shops or to take our kids to school, and sometimes we’re too exhausted to even get 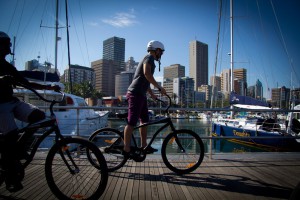 off of the couch.

But by just taking the first steps you’ll feel better. The health benefits alone should get you thinking. Better mental health and self esteem, lower risk of cancer, less stress, more excitement, and the list goes on.

Cycle to a friends house, the local shop, the park, the bus station, the train station, the taxi rank. The cities around South Africa are slowly taking grasp of this idea, but for it to really work public participation and support is neccessary.

In Cape Town, for example, there is a rapidly growing movement toward commuting by bicycle. The city has invested heavily in improving cycling infrastructure, from designated bicycle paths, to the MyCiti transport system which allows bicycles on their buses. The public are getting involved too, with increasingly popular critical mass events, crowd commuting, awareness campaigns and more. Even massive corporations like Levi’s are hopping on the bandwagon, releasing a bike commuter range, together with a beautiful commuter map of Cape Town .

In Durban, the eThekwini municipality recently completed several bike lanes throughout the city and its surrounds, with more on the way, though the lanes as they stand are currently more suited for leisure cyclists than commuter based cycling.

To be fair, it’s not all roses for those of us that get around by bike, and there certainly are obstacles in the way a lot of the time (Quite literally, with many drivers and vendors around the city assuming that the new bike lanes are great places for parking or setting up stalls).

In truth, many drivers still have a very negative perception of cyclists and often behave incredibly rudely and dangerously. But the beauty of perceptions is that they may be altered over time. And the best way to change something is to be the change yourself, and to inspire others to do the same. So get off your couch, get out of your car, and back on two wheels. You haven’t forgotten how to ride, but you may have forgotten just how good it feels.

Here are some links to get you rolling:

So long, and happy cycling!