I woke with surprise, prepared, yet disoriented. It was 10pm and a car was hooting outside my hostel. My taxi had arrived. What? I had told the driver twelve, not ten. Admittedly, I had told him that in broken Spanish in the pouring rain five hours earlier. After trying unsuccessfully to convince him that I had in fact said “me recogiera a las doce” I gave up and we began our journey, in the dead of night, listening to Latin pop music and swinging wildly around mountain bends, two hours before I had planned to leave. I saw this as an auspicious start to my adventure. I wanted to hike fourteen kilometres through the dark, alone and with no map for the sunrise that would afford me with views of all of Panama. 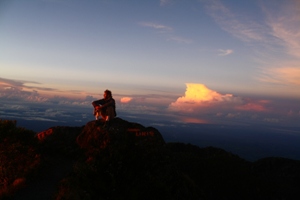 It was winter in the Panamanian highlands, with daily rain, and cold nights. I was staying in a small hostel in Bouqete; an old, picturesque town famed for its world class coffee production and its natural beauty. I was planning to summit Vulcan Baru during my stay- at 3, 475 meters above sea level Panama’s tallest peak, and a dormant volcano to boot. Situated in the Chiriquí province of Central Panama, Vulcan Baru towers over lush, cool rainforests, coffee plantations, small hamlets and orange groves. It sheer enormity attracted me, and I was hoping that I would get a gap in the wet and cold weather to shoot for the top.

After a terrifying 15 minute drive up a tortuous and winding road the driver dropped me at the trailhead, pointed through his windscreen, and muttered, 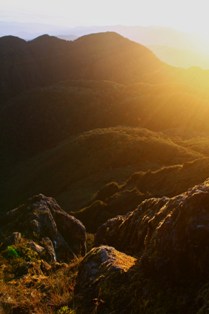 “Vulcan Baru”, with a bemused expression. He seemed to be wondering why a crazy gringo wanted to walk through the night merely to get to the top of something. I was wondering the same thing as I tied my shoes, did a few hopeful stretches and started walking.

At first the path was a broad gravel road, the moonlight showed my way and the going was easy. Massive trees were silhouetted by the stars and the silence of the night was only broken by the crunch of my shoes and the occasional chattering insect. The further I walked, the rougher the path became, and the darkness crowded in as the vegetation thickened.

I came across a T junction, a detail neglected by the local who had given me rough directions to the top. One way lead through a gate, and the other descended rapidly. Assuming that down was not the way to the top of a mountain, I opened the gate and slipped through. I walked for ages, past a house nestled in a valley, and giggling rivers and cow pastures where paths became uncertain, criss-crossing over increasingly steep and slippery slopes. I walked until the single track I had stumbled onto became increasingly vague and deceptive, and I could no longer deny the fact that I had taken a wrong turn. A bitter pill after kilometres of walking, in the dead of the night, with a massive silhouetted mountain blocking the stars, its peak just out of reach. I began to feel like an intruder, alone in the dark forests of the Panamanian highlands. My mind begun to trick and taunt me and I retracing my footsteps as best I could, hoping to find my way back to the T junction.

Half an hour of fast walking, with some circles traced and confusion brewing and I was back at the gate. The darkness had shaken my confidence, and the path was getting rockier but I was determined to make it to the top. I walked through the night, and arrived at the peak just as the sky began to lighten, exhausted, with numb fingers, and a scattered mind. It was dark and freezing with nowhere to hide from the chill wind, so I took shelter at the base of a massive crucifix on the summit, and waited to see what dawn would bring. 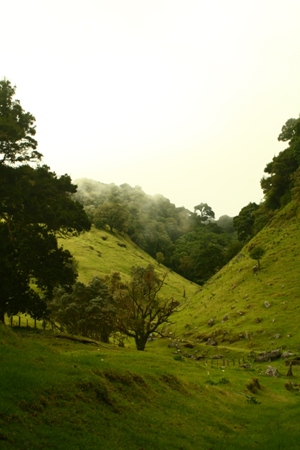 I saw the sky lighten slowly, almost unnoticeable in its subtlety at first. Clouds pinked as the tentative tendrils of the sun started creeping towards them, warming them, eventually igniting them; pink orange explosions in the sky. Scattered rays of light flooded my vision and stark silhouettes of the hilly, forested, landscape surrounding me slowly took shape. Below me were the valleys of the highlands, with misted rainforests dripping verdant greens across the landscape and small wooden houses crouching in clearings.

Bouqete lay in the distance, huddled in a valley, flanked by a large river and coffee plantations tenaciously clinging to near cliffs. Far to the east I could make out the crystal waters of the Caribbean coast, the bays and archipelagos gracefully carved from the landscape over millennia. To the west lay the Pacific Ocean, its dark mass butting against black sand beaches where trees and earth submitted to the tireless pull of the waves.

I sat, watched, and contemplated for a long time. The sun rose fully, warming my numb fingers and relieving me of the lonely darkness of the night. Eventually I began my decent, invigorated, alive and far removed from the exhausted and nervous me from the night before. The walk took a blissful eternity. I feasted in the greens and the moisture of the rainforest that had been hidden to me the night before.

Ferns dripped, flowers bloomed, birds swooned, and I allowed gravity to pull me down the mountain. I slept in a patch of grass in the sun, my sense of time warped, my legs exhausted. Eventually I made it to the road where the taxi had dropped me fourteen hours and thirty kilometres earlier, satisfied and exhausted.

Hitching a ride back to Bouqette in the back of a farm truck, I caught glimpses of the colossus shrouded in swirling clouds, hidden from view, hulking and mysterious, its true nature revealed to me and only me that day.