The Root of All Love: Fantastic Orchid Etchings by Daleen Roodt

Celebrating South Africa’s biodiversity is a wondrous affair and what better way to magnify the charm and efficacy of the natural world than through art and appreciation. So it was at this year’s Kirstenbosch Biennale as the focus of the botanical art was on the medicinal plants of South Africa. A little known fact is that the traditional medicine contributes over R 1 billion to the economy and is a form of healing used by over 25 million people in this country. 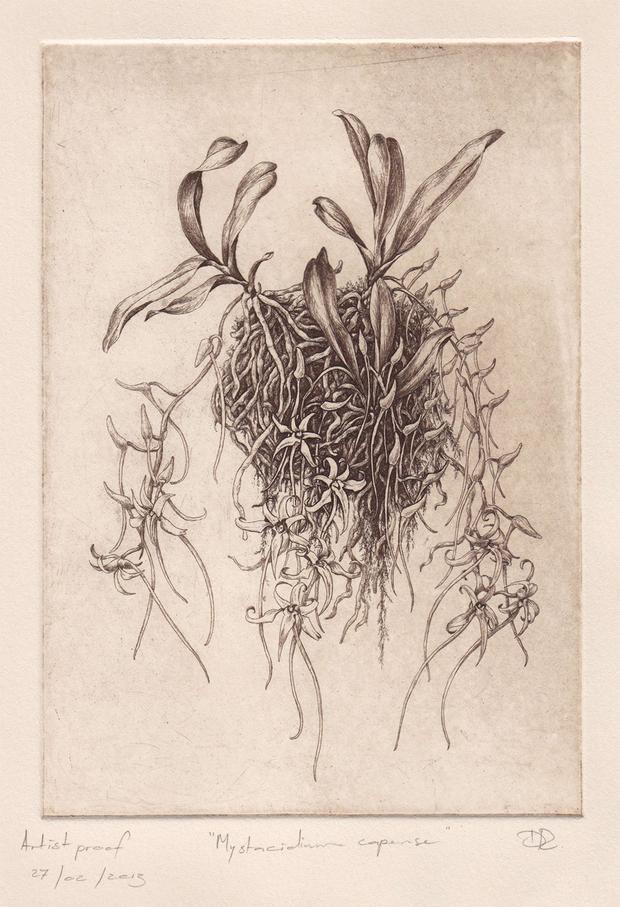 The art was beautiful and thought provoking but what really stood out for me was the work of Daleen Roodt. She chose to showcase four epiphytes from the family Orchidaceae (derived from Greek orkhis, literally meaning ‘testicle’). These incredible blooms were thematically combined due to their use as aphrodisiacs in traditional southern African medicine practice. 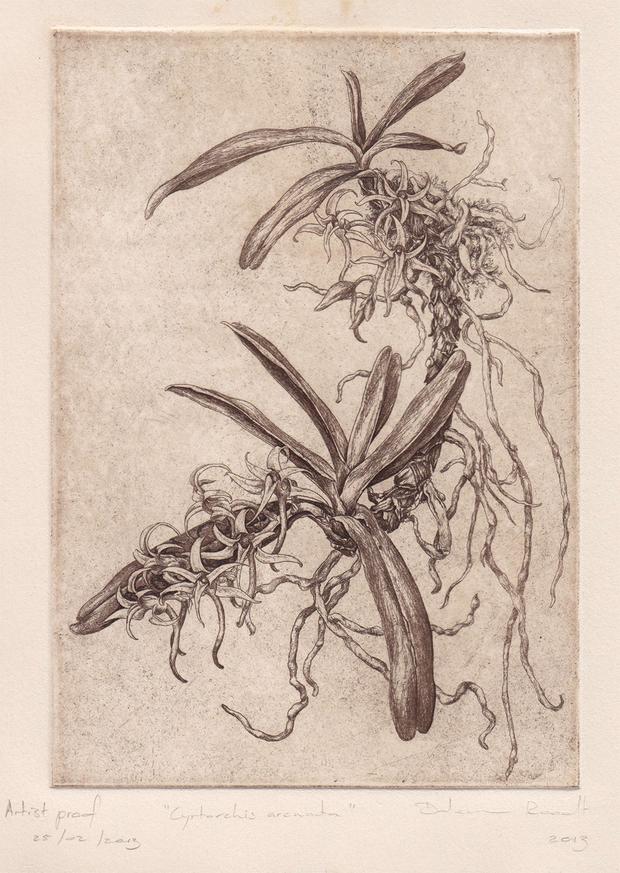 The four species, including Aerangis mystacidii, Ansellia africana, Cyrtorchis arcuata and Mystacidium capense, are used as love remedies; infusions and concoctions made from the different plant parts and often administered as an emetic, are reputed to charm one’s lover, promote fertility, or inspire new love. A. africana is furthermore used medicinally to treat coughs and symptoms of madness.

These orchids, notably A. africana, have a steady presence in traditional muthi markets and are consequently being collected extensively, threatening their existence. Being themselves symbols of love embodying characteristics of complexity as well as contrasts of frailty and harshness, these species were etched into copper plates with the use of traditional techniques in order to secure their visual existence and thereby allowing their flaunting nature to seduce the viewer.

Born in Pretoria in 1986, Daleen is a mostly self-taught artist. After a year of studying fine art, she studied languages at the University of Pretoria and did an Honours degree in translation and professional writing. Her interest in botanical art started in 2008 when she was approached to make scientific illustrations for SANBI and the University of Pretoria. She was involved in illustrating Dictionary of Names of Southern African Trees and Wildflowersof Southeast Botswana, among other field guides. Commissioned to capture the indigenous flora of the Francolin Conservancy, she painted a collection of over 50 botanical works in watercolour and oil paint that formed the basis of her first solo exhibition in 2012. In 2010 she received a bronze medal at the Kirstenbosch Biennale for four of her botanical works, and a silver medal in 2013 for her botanical etches. Daleen started etching in 2012 following a commission of journeying to the temples of Cambodia, and soon afterwards this fascinating medium manifested as her new style of botanical expression.

You can view more of her work at www.daleenroodt.com