The End of the Line

I went to a press briefing about the soon to be released documentary feature film called The End of The Line. There were a number of sceptical journalists present at the breakfast but after the half hour of footage that we were shown the mood had shifted considerably – to one of stark enlightenment and an urgent desire to do something. The facts about the fishing industry are difficult to comprehend but thankfully the director and author of the book The End of The Line have taken the trouble to bring them out into the open. 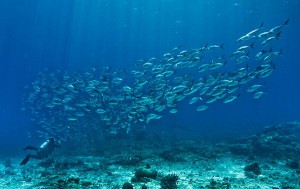 What you will see will make you seriously think twice about the type of fish you eat – especially Tuna. To me this was a horror film. The fish that are being slaughtered in alarming quantities are wild creatures and they bleed just like any mammal does when being killed. Modern technology has enabled the big fisheries to track, totally pen in and then literally scoop out vast quantities of fish – all the ‘by-products’, turtles, dolphins, sea birds etc that are caught within the pen die too and then they are just dumped back into the ocean, dead. The waste and the cruelty are beyond staggering and I spent most of the time looking into my lap as some of the scenes were too gruesome for me to absorb.

As Charles Clover – the author of the book The End of the Line says, “Angels weep at the signs of the destruction”. The divide between politicians and scientists is very noteworthy in the realm of the international fishing business. Scientists set quotas on stock so that species have a chance to recover. Renegade fisheries ignore the quotas and politicians try and keep the big business side of things happy so they ignore the scientists warnings and set quotas that keep the fisheries happy but that will inevitably ensure that fish stocks decline and rapidly at that.

The result will be a fished out ocean and it is not something that will happen in the far distant future. Already Mitsubishi – the Japanese mega company is stockpiling Blue Fin Tuna as it is on the extinction list. This shows what consumer demand – with no knowledge of the impact down the line – is doing to the ocean.

Your choice of fish has a direct effect on marine biodiversity so please check with the Sassi fish guide to see what fish you can eat without contributing to further decline in the fragile populations. Let’s start a movement and name and shame restuarants that serve fish that are on the endangered list. You can also speak to the chef and find out where he gets his fish from, ask how it is caught as well. Educate as many people as you can about fish that are on the endangered species list and insist they be removed from menus of restaurants and hotels.

See www.wwf.org.za/sassi for a fish check list To check the status of any fish text its name to 079 499 8795 www.endoftheline.com The End of the Line will be screened across South Africa at Nu Metro cinemas and Ster Kinekor on the 22nd October – I really urge you to see the film as it is a serious wake up call.