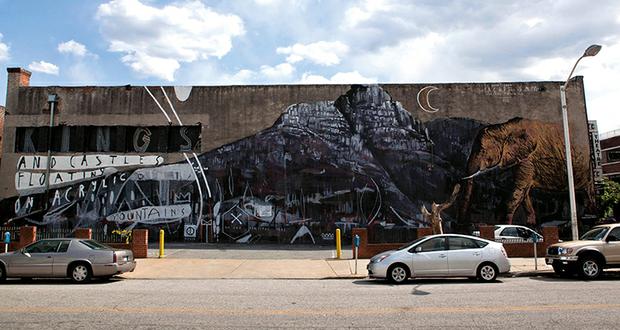 Ricky Lee Gordon talks to Genna Gardini about creative communities and the business of street art
“I always saw graffiti artists as urban superheroes,” explains Ricky Lee Gordon, the founder of arts activism project A WORD OF ART. The son of an art teacher who taught from the family garage, Gordon’s education in his chosen medium started early. “After I had filled up a few sketch books I started to practice in the garage with spray cans,” says Gordon, who now paints under the street art pseudonym Freddy Sam.

Gordon was still a teenager when he produced what he calls his “first real street mural” on the edges of Alexandra, a township in Johannesburg separated from his suburb home by a short highway overpass. “I think that changed my life,” he says. “I was really angry at South Africa at the time but that mural made me realise I could be part of change. I fell in love with the power of making art in public space for the everyday man.”

Despite achieving “the highest art mark in South Africa for 2003”, Gordon did not receive a matric exemption and was rejected by UCT’s Michaelis School of Fine Art. Urged by the university to rake up the missing academic points, he enrolled at night school. “I lasted one month, it was so awful,” Gordon laughs. He dropped out and moved to London. “I found myself working in Camden Town for nine months, which became the inspiration for the rest of my life,” he says. “I realised how passionate I was about people, art, culture, diversity, storytelling and travelling.”

Returning to South Africa, Gordon established WORD OF ART with partner Shani Judes and set up shop in Cape Town. Initially a creative agency, the company morphed into something more nebulous when it moved into the Woodstock Industrial Centre. “I realised my passion was for hosting and creating a platform for artists rather than managing them,” he explains. “Me and Shani ended WORD OF ART as an artist agency and I relaunched it as A WORD OF ART (AWOA), an arts activism project made up of a residency, community outreach initiatives, and a physical exhibition and project space called A SPACE.”

In the handful of years since its birth, AWOA has facilitated and hosted a slew of community art projects, exhibitions, interventions and parties. It is most well known, however, for the /AWOA international residency programme. “The residency happened by beautiful accident,” explains Gordon. “I met an artist wanting to come to SA and we approached a funder who supported the idea. Within one year I hosted twenty-seven international artists.”

The idea of playing a part in a larger community of artists comes up repeatedly while talking to Gordon. It is also reflected in his accolades: he was shortlisted for the 2012 International Award for Excellence in Public Art, just a few months after receiving an Arts and Healing Network prize for 2011. “It’s about helping to build creative communities,” says Gordon when talking about his and friend Michael Leslie’s latest project, an umbrella arts consultancy called /ANDPEOPLE, that /AWOA will fall under. “I always remind people that when we were younger, we hated playing on our own in the corner and always hoped to be invited into a collective imagination where you could add your personality to a greater game, a dialogue. I think that’s the essence of creativity.”

For more information, see www.andpeople.co.za and www.a-word-of-art.co.za
Genna Gardini is a writer and poet based in Cape Town. 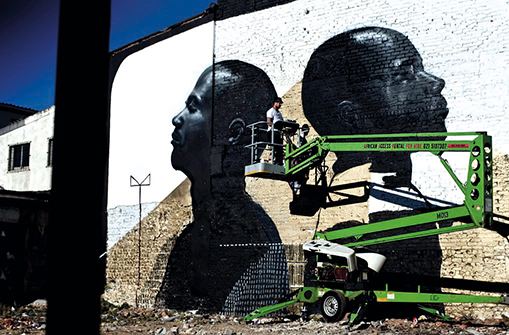