Melissa Baird stepped out her comfort zone and attended the Pioneers17 Top 50 Start-up event in Vienna Austria to discover how Artificial Intelligence and smart tech innovation is changing the world one app at a time and at a rapid eye movement pace.

The venue was Vienna’s Hofburg palace; an astounding architectural masterpiece (and relic) of the grand Austro – Hungarian empire replete with ornate frescoes on its ceilings, wide staircases and thick marble columns in enormous halls lit by glossy chandeliers and whispering ballrooms that spoke of a glamorous past, and survival in the face of the destruction of war.

There were five stages showcasing the best in tech and inspiration, info -tainment and empowerment; masterclasses to help start-ups pitch their product to investors – and the media – and inspiring interviews with the likes of Virgin Galactic (yes, they are going to the moon) Google discussing their AI assistant (you can ask it anything and it will search your files for the answer and the whole internet too).

I listened to start up pitches as the inventors took the challenge to present their ideas to investors. They included BeeAnd.me – smart monitoring for bees that enable apiarists to monitor changes in hive behaviour and develop scientific knowledge about the habits of the world’s most precious and productive pollinating resource. Another included using Artificial Intelligence (AI) to enable doctors to make better diagnosis and have access to the latest research – who on earth can read 150 000 research papers and still have a life or enable it in a patient? No problem – AI can do it and feedback. Sen wants to ‘consumerise space’ by recording videos and capturing space data to send it back to earth – what is out there soon to be ‘brought’ to you by a famous brand. Their aim is to share information ‘universally’ so what happens on earth is also taken out there for there to the Moon and Mars (missions planned) “as the space economy and activities expand in these worlds” – yes other than earth. 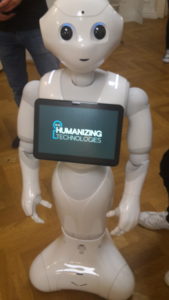 That was just the first few hours and, while I was taking lots of deep breaths as I processed the information overload, I met a robot named Pepper that responds to human touch through mechanical undulation and murmurs sweetly like a cat would purr. Astonished I was at ‘her’ responses and I challenged her creator Dimitrios Prodromou, the co-founder of Humanizing Technologies GmbH, to explain how emotions could be mechanised; what of love, could that awe-inspiring and unstoppable force ever be programmed?

Smart homes are the homes of tomorrow. They are energy efficient and can control temperatures for better living conditions. I interviewed Morten Bremild co-founder of Anyware Connected Living. They have created a smart device that acts as both energy regulator and intrusion detector in your home. The device looks like a light bulb, is as easy to install and what will be of interest to South Africans is its one system sensors that can detect intrusions, turn lights on and off while you are away and regulate the temperature of your home. The indoor climate monitoring sensor detects humidity levels and if above 75% humidity the sensor alerts you. Their aim is to make smart homes simpler and – Morten is very keen to find partners in the energy utility and insurance industry in this country.

Currently smart homes are in the realm of the early adopters of technology (16% of the overall market) and their target is for the early majority market who want a meaningful smart home experience so the product is easy enough for anyone to install and there is valuable data for insurance companies and energy companies to give back to the customer in terms of health and safety.

The device was a great success at the largest consumer expo in the US and the product will also be available via Amazon.com. From an energy perspective, a household can save 5-7% per degree Celsius – over a year if temperatures are regulated correctly.

There is an app to help you develop your happiness muscle – HiMoment that I have been trying out.  The ‘happiness industry’ is massive (USD 60 billion) but this is not about encouraging more social media narcissism, rather it is a personal timeline of sorts but complete with videos, images and voice records. A good ‘get out blue’ use for your phone. I rely on my memory and pictures for that but I could see its point and purpose.

On the music front an amazing speaker Zylia.com that can record all the instruments in a room making sound engineering unnecessary and helping musicians record top quality clips without having to spend fortunes on sound studios. In sport, there is a fabric (SUPA.AI) that records your biorhythms and reports on fitness levels.

Capitalising – or aiming to – on the legal cannabis growing industry is a start-up called Leaf that has created their own fridge which is a grow room and monitoring system -all in one -so medical cannabis can be grown free of pesticides and by individuals who require the prescription. The developer calls it the ultimate gardening and health tool.

But it’s Artificial Intelligence that is making the biggest impact on our present and – ergo- our future. James Lovelock – in his Rough Guide to the Future speaks of this as being the single most disruptive technology event ever. It will impact how we manage our home life, investments, diagnose illness, have sex and work. If you are stuck on any question or need to speak a different language – just ask Babel or Google’s assistant (being engineered to outsmart Apple’s Siri). The live demonstrations of the capabilities of these interventions was astounding.

This gathering of new economy CEO’s was like a fashion shoot for the world’s top hipsters and they were well supported by engineers, musicians, doctors, scientists and investors. This reinvention space shows a snapshot of how the world is changing and at a pace that most won’t keep up with.

But what really grabbed my attention was the concept of impact investing – Silicone Valley is the home of the start-up and Ela Madej who is the founder of Fifty Years – an impact investment fund that is there to solve the world’s biggest problems spoke clearly about the fact that all business is being called to understand the finite resources of the planet and adapt. The venture capital market has never been called to account for the impacts of the investment itself; what it does to the planet, does it help solve climate change, social inequality and injustice? Technology and capital need to be in service of the planet – not purely profit. Research shows that most MBA students would take a cut in salary to align their work to the personal values they espouse. There is a new generation of business leaders emerging who see the solutions need to come from business as well as consumers who have more developed intrinsic values.

What was alarming is that AI already makes high level investment decisions and will do so more in the future. But you can’t transfer your values to a piece of software that is programmed to seek out profit above anything else. “More and more aspects of the economy are not being run by humans” she said and therefore we need impact investing. Charly Kleissner of Impact Assets – also Silicone Valley based – agreed and he said the human face of investing – the ‘consciousness’ is what is needed above just great algorithms.

Consider the impacts of industrial agriculture on water and animals and the dystopian future is already here. In the future, all meat will be farmed outside of mass animal farming – in laboratories “cellular agriculture” as animals no longer can be efficiently farmed for their meat and by products. In 1931 Winston Churchill predicted laboratory meat and this turns out to be the most resource efficient (and ethical) way of eating meat. You can do whatever you want with animal cells without hurting the animal or taking away valuable water resources used for industrial abattoirs and factory farming.

Impact Investing throws away the Keynesian perspective that business is above humanity and success is measured by profit alone. Now more than ever before the global corporations are being called upon to solve the world’s problems and not capitalise on them.

But what about sex. there is an app for that too and the intimacy problems that are resulting from a disconnected world – sex robots exist, sex toys exist but what of an intelligent sex toy? One that reads your body and your pleasures? Is this a sexual revolution that doesn’t involve people?

I was asked the question what happens to start up when they grow up? I reckon they just might offer astounding solutions to some of the problems this world is facing.  Technology is replacing people and helping them too – but what is the balance and where will it be found?