Know IT: The beginners guide to biodiversity…

Bio what? You may hear words that are used to describe things that you sort of ‘get’ but if asked may perhaps not be able to truly reflect back what it means to you. ‘Biodiversity’ is one such a word you are going to see more and more of but what does it really mean?

“The economy is a wholly owned subsidiary of the ecology. Not the other way around”. So said Gaylord Nelson – the founder of Earth Day – in 1970. Since then there have been international conferences on climate change and business and world leaders – including the Pope himself – are stating that the natural world is struggling as a result of the extractive, agricultural and fossil fuel industries rampaging their way through the planet’s resources.

Biodiversity is the term used to describe the entire collection of plant and animal species on the planet and to describe specific regional natural complexity. As individuals we are part of the human race which is in itself full of diversity and we all live within the earth’s biosphere; it is an enclosed system and all the water we have on the planet is all the water we have ever had on the planet. All the air is continually recycled through various earth ‘lungs” including wetlands and forests. Trees are our filters and the life lived amongst them our legacy. All the living creatures we could ever imagine are part of this biosphere and the eco systems that connect are the communities that the living world gives to us. This is ‘biodiversity’ on a grand scale.

Perspectives are changing about how the natural world is being affected by humans and there is an increased awareness of the connections linking people to each other and to the natural world that supports them. Those lucky enough to live in a place of beauty – celebrate it. Those that are next to and caught up in environmental degradation feel it in all aspects of their lives, often at great harm.

So if you still think that just because deforestation and species loss is happening somewhere else on the planet ( it’s happening everywhere) and you won’t be affected you may find this opinion will be reformed as more and more information comes to light showing the contrary. The biodiversity loss we are seeing is massive and what is being lost represents a loss of something fundamental to our well-being as part of healthy, balanced eco-system.

You can be a biodiversity steward in your back yard (or balcony) by planting plants that feed pollinators like bees and birds. Rather than planting lawn, consider a wild flower and succulent garden that is water wise and encourages plants of your region to thrive. 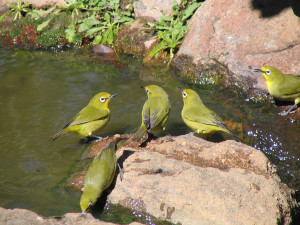 – 70% of the Cape Floral Kingdom’s 9 600 plant species are found nowhere else on earth.

– Cape Town itself is home to about 3 000 indigenous plant species, 190 are endemic (only found in that place), 318 are considered threatened and 13 are extinct or extinct in the wild.

– There are numerous invertebrate species in Cape Town, approximately 111 of them are only found in the Cape Peninsula Mountain Chain.

– There are 27 amphibian species in Cape Town of which ten are listed as Red Data species.

– Many globally important horticultural plants originate in Cape Town and the Cape Floral Kingdom in general. These include geraniums, gladioli, freesias, ixias, pincushions and gazanias.

You can experience the beauty of our diverse environmental kingdom by visiting a national park – see here for details: www.sanbi.co.za