Footsteps in the sand

Taking a leisurely hike along the bays that make up the route of the Cape West Coast Biosphere Reserve’s Five Bay Trail is like sipping a rich, salty tonic that rejuvenates the soul and inspires imagination. After walking 28 kilometres along unexplored nooks and crannies of unique coastal biodiversity my legs were up to speed with how ‘hard’ soft sand can be and in the surprising flotsam and jetsam washed up on the shores was an empty bottle that made me wonder: was this the one with the genie in it and if so, what would my wish be? 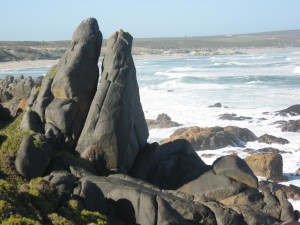 The Cape west coast is renowned for its harsh natural beauty, fishing villages, crayfish, birds and magnificent surf. It is also home to the Koeberg Nuclear Power Station and the Saldanha Bay iron ore facility and a wind farm initi ative on the outskirts of Darling. These two conjoining sentences clearly illustrates the paradoxical relationship between development; both industrial and tourism related, and the need to preserve a fragile social and natural environment that makes this coastline utterly unique in the world.

What is not well known amongst South Africans is the fact that a large section of the Cape west coast is designated as a biosphere reserve under the RAMSAR convention which gives it certain gravitas as a major landmark of ‘worth preserving’ ecology.

So what if there was an opportunity to create a model for sustainable tourism that could demonstrate the ‘value’ of natural heritage? This is exactly what the Cape West Coast Biosphere Reserve’s Trails Project aims to achieve and with a choice that includes The Darling Stagger; Eve’s Trail; Wheels of Time (for cyclists), Berg River Canooze (yes you guessed it) and The Five Bay trail they are varied enough to tempt itinerant urban adventurers.

The fact that the trails needed to be appealing to both the South African and international tourist goes without saying and I bet anyone who ventures forth on The Five Bay Trail to not leave buoyed by the sheer exhilaration of a walk on the wild-side that is peaceful, expansive and invigorating.

Our party arrived late on Friday afternoon and enjoyed the first gentle walk along the beach in Paternoster. During the journey 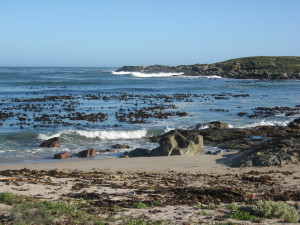 there I had already seen three rainbows and the remnant dark grey rain clouds made for a powerful backdrop to the intense orange of the setting sun. The tangerine infused light washed over the fishing cottages and remarkable white domed public library bringing us all to silence.

As we stood on the beach Morgan – our guide – showed us how the old fisherwomen used to ‘fish’ for white mussels with their feet. Removing his shoes and socks he put his feet into the wet sand and started to do the twist, laughing as he rocked and rolled his legs into the sand hoping to find what his ancestors had found on a regular basis; fat white mussels that would form the base of a hearty soup.

The next morning was icy cold but clear and as I stepped outside of Klein Paternoster; the charming and welcoming guesthouse that was our home for two days, I saw two blurry shapes on a branch of massive gum tree outside. On closer inspection the two blurs registered as eagle owls dozing in the dawn, surrounded by sparrows and starlings singing their joyful dawn ch orus.

We set off soon after breakfast and walked through Paternoster heading south towards Tittiesbaai. The quaint houses and community buildings are fantastically photogenic; as are the upturned fishing boats lining the shore. The massive graffitied rock could have been better reading; its roll call of names of people we will never know seem idle in a place where there is so much more to be said. 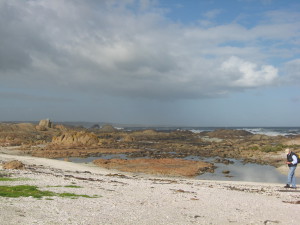 The first day’s hike ends at Treekoskraal and the at-first rocky shoreline slowly wound its way into long swathes of white sand and damp, sandy cliffs. As a passionate sea and shore lover I always take a bag to pick up the plastic litter I find along the way but it was with some consternation that my fellow guests watched me slowly but surely fill to the brim one large black garbage bag of flotsam and jetsam along the way.

Each piece of plastic be it a bottle, bottle top, piece of fishing wire, remnant of rope, abandoned crate, a hard hat, old sunglasses, a shoe or various sized containers, all had a beginning somewhere and now had ended up on these shores of the Cape west coast. We hear of the Japanese Tsunami debris floating it way along the sea currents toward the east cost of America and of the plastic island in the Pacific that is twice the size of Texas. How lucky is this coast-line to be relatively free of pollution; but it is going to require vigilance to keep it that way.

The sea was like a turquoise sheath hugging the white sands and the succulents were in flower; in particular one I had never seen before – ‘Bobbejaan’s bybel’ that looks like a land based anemone.

Our enthusiastic guide was full of stories about the locals and the history of the area. As the trails are new, so is he to being a guide, but is approach is the timeless sociable, warmth of a west coast local.

He told me that at Tittiesbaai each March there is a Jazz on The Rocks festival. Apparently at one of these soirees Hugh Masekela greeted the dawn from the stage on the rocks 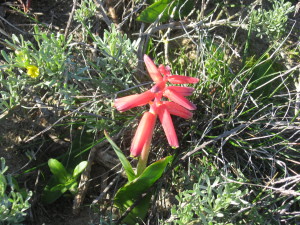 and all the campers woke to the sound of his trumpet. I looked at the empty rocks with the ‘Jesus birds’ (cormorants) drying their wings in the sun and imagined the maestro in full swing, his music punctuated by the smell of braai smoke and the rumble of dancing feet.

We possibly walked faster than usual on the first day because we were excited and invigorated by the sheer expanse of coast line. My legs were not quite jelly when we arrived at the infamous ‘Panty Bar” at the Paternoster hotel but the cosy establishment had a chair waiting for me. When I left outside the hotel was a little boy who had crafted two hearts out of wire and sea-shells and I bought them because I thought them a fitting token to remind me of the love I have for the west coast. At once stark and uncompromising; full of paradox and yet always offering warmth and life viewed from a different perspective so that the times there live in your memory always.

The final day of the hike begins at Treekoskraal and ends at Jacosbaai and the Weskusplek for a hearty lunch. Thereafter you are driven back to Paternoster to pick up where you left off and return to your point of origin. Returning home I mused on the empty bottle that had become a kind of mascot to our group and the probability of there being a genie in it. We all agreed that in the current economic conditions perhaps he would be offering only one wish as opposed to the requisite three, a sort of ‘wish crunch’. Having just one to make gives pause for thought and as I am still considering mine, (and yes I do still have the bottle) it was enough to enjoy the fact that time happens differently on the west coast and simple things matter most; like where you are going to place your next step. 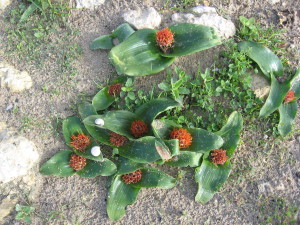 Transfers between Treekoskraal, Jacosbaai and Paternoster by the Green Cab:

Images courtesy of the author