The 1960’s classic film Mary Poppins was arguably one of the first pieces of popular culture to show the notion that a woman’s handbag can house a large number of objects that are seemingly far too much for the volume of the bag itself. As time has moved on, the size of the bag has not changed but modern design has pave the way for large objects to be packed into small spaces. Deflateable beds, fold up tables, and compressed electrical goods are more of a norm than a wonder. Nonetheless, if someone were to come along and claim they had made a fold up bicycle, one would think they were having a laugh. 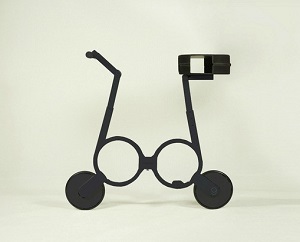 A folding bike has obvious appeal, with the compact design allowing users to store it under a desk at work, lug it on public transport or throw it in the car. What the Impossible is aiming to achieve is a new level of portability.

The bike itself weighs just less than 5 kg and when folded up is 43 cm tall, just a few inches bigger than the average laptop. The bike runs on standard batteries that can be recharged in your normal plug outlet, and the mileage can be as far as 24kms. The design has not yet been finalized and the design team are still working on the finer details of the engine, but this concept is very appealing for those who wish to save on fuel and not build up a enormous sweat on the way to work.For more information on this innovative design, please visit: