A long time ago (640 BC to be exact) a man named King Nebuchadnezzar II of Babylon had a very depressed wife. It is believed that said wife (Amytis of Media, aka princess of Persia) was blue because Babylon was a hot, dry place and she missed the beautiful gardens, hillsides and mountains of her homeland Persia. Being the good husband that he was, King Neb commissioned a magnificent garden to be built that hung high above the city. In modern mythology, this magical place is known as The Hanging Gardens of Babylon, one of the seven wonders of the ancient world. 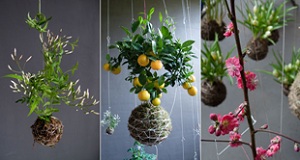 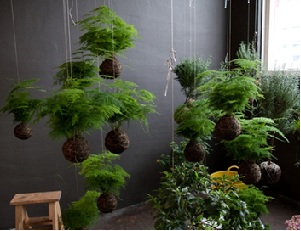 In today’s more modest 21st century homes, a hanging garden may seem a bit far fetched; (as husbands who also happen to be kings are quite hard to come by) but assembling a hanging garden, more commonly referred to as a string garden, is not such a difficult feat and is perfect for loft life or an office space that needs sprucing up.

These floating gardens are the brainchild of Dutch artist and gardener Fedor Van der Valk, who discovered these self-supporting, hanging plant structures almost by mistake while trying to create a piece of installation art. Watch this simple one and a half minute tutorial on how to make your own string garden.