Walking In Circles: The Mysterious Stone Structures of Mpumalanga 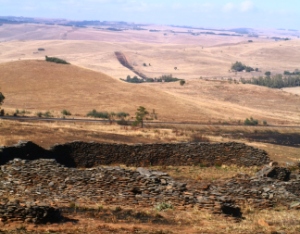 Rolling hills. Brown and fire blackened grasslands spread out as far and wide. Stray trees, stunted and gnarled, cling in many seemingly random clusters. On closer inspection, it becomes apparent each of these clusters of trees is surrounded by low, curved circles of stacked rocks. And, just visible in the long grass, walls connect each of these isolated rock circles, spaced anywhere from 20 to 120 meters apart.

The landscape feels old, weather worn and rounded, and these walls share that feeling. The rocks are settled in their places in the low, ubiquitous, semi hidden structures, and the lichen growing on their surface hints at the many thousands of years they’ve spent lying on the surface of the earth. 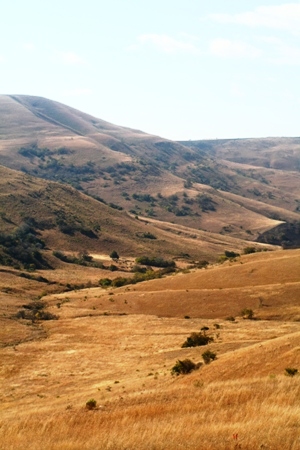 The trees, having found happenstance protection behind the shelter of the rock piles, have thrived in their lucky microclimate. Their bark is rough and resilient, their leaves tough and leathery.

The origins of these mysterious walled structures, found across Mpumalanga, most densely in the hills of Machadodorp and Waterval Boven and said to be numerous beyond measure, are plagued with a murky and uncertain history. The sheer scale of the structures, which vary from meters to hundreds of meters in size, boggles the mind and calls into some of the most common, yet most difficult questions to answer when confronted with ancient and forgotten man-made structures- who were the people that put these walls together, and why did they do it?

These are never easy questions and strangely, despite the size and magnitude of the estimated 20 000 ruins in the province, very little formal academic interest has been shown by archaeologists from the area. In fact, in an early observation of the structures, experts ruled that the circles were ‘of little historical importance’, and were most likely kraals used by old tribes. This does not, however, account for the fact that each and every one of the circles lacks an entrance.

These days, Michael Tellinger, an independent researcher fascinated by the rock structures of the area is pushing the theory behind these circles into extra terrestrial territories- often to the chagrin of local academics, who dismiss his work as ridiculous. To Tellinger, the circles exhibit ‘obvious’ signs of being constructed with the purpose of harnessing and channelling energy from the earth for transmission to extra terrestrial beings, by a population of humans that had been established to mine gold for these aliens.
This ‘far out’ (excuse the pun) theory has been ridiculed by academics who fail to accept Tellinger’s hypothesis, despite evidence suggesting that the circles were built in the shape of magnetrons and that the earth’s subsurface is significantly warmer within the radius of the circles than beyond them. In fact, it is likely that Tellinger’s somewhat scornful and pushy approach to academics and their institutionalised knowledge structures have played a role in the dismissal of the sites by local archaeologists. According to Tellinger, the disinterest of the academic world is symptomatic of their general distain of things that don’t fit into the current accepted academic perspectives of early civilisation. This close minded rejection of the ‘fact’ of a 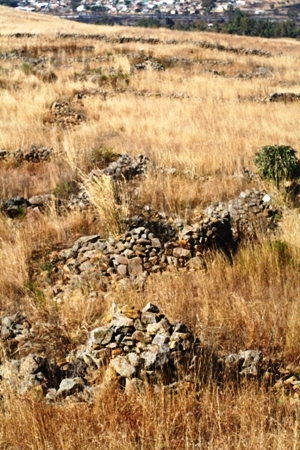 massive pre-historic human civilisation near the cradle of humankind is testament to the staid and structured nature of academic understandings of history.

Despite scepticism of Tellinger’s theories on the circles, there is little doubt that Adam’s Calendar, re-discovered by Tellinger’s partner Johan Heine in 1993, is a site of important historical and cultural significance. The site is home to an array of rocks, some still standing, and some presumed to have been standing, that indicate important meteorological events including the solstice and equinox as well as the four cardinal compass points, offset by a number of degrees to account for the shift in magnetic declination over the years. Two of the key rocks in the arrangement also function as a calendar, with the shadow of one being projected onto another in a slightly different position throughout the year. According to Tellinger, the calendar is 75 000 years old and predates any manmade structure to date. This, obviously, doesn’t sit well within the established halls of academia.

It’s become a bit of a bun fight between Tellinger and the academics of late, and both parties rarely see eye to eye. Tellinger, with nothing more than a degree in pharmacology, is a self proclaimed expert in the field of stone circles and has generated a substantial following in the United States and locally for his alien inspired theories. The local academics on the other hand, regard his hypotheses as nothing short of ridiculous, at least publically. 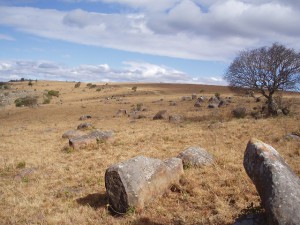 This infighting is likely not furthering the cause of answering our burning questions about these ancient structures and their builders, and ultimately, as is so often the case with human kind’s mysterious ancient past, no certain answers appear to be on the horizon. After visiting some of the key sites and being struck by the scale, design and structure of these stones circles, my interest has been strongly piqued, and I’d love to know the ‘real’ truth about the sprawling low walls of Mpumalanga. The mystery sits heavily on the landscape, piled in seemingly random rock circles, indicating something certainly, but what we just can’t know. Unless you believe in aliens of course.