The Limitations of ‘Half’ and ‘Whole’ 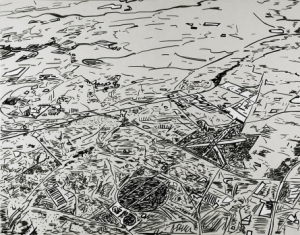 In the exhibition at the Substation in Gauteng, Quinten Williams unfolded one ‘half’ of what is required for the MA in Fine Arts at the University of the Witwatersrand. The exhibition component of his work pulls aspects of Johannesburg’s ‘human and non-human bodies’1 and the transient relations between these into the white cube.

The City as Medium and Accomplice
Much has been written about this particular ‘elusive metropolis’. Williams’s Merzbau-like urban inhabitation of the gallery underlines a number of Johannesburg’s many elusive environments by intensifying them. He focuses on the marginal and unspectacular, reconfiguring disparate and obscure parts of the city, and artificially bringing some of Johannesburg’s urban inconsistencies close together. During Williams’s on-going adjustment of the exhibition’s construction – over two weeks – the gallery was publically accessible, blurring the linearity of ‘setting up’, ‘showing’ and ‘tearing down’. In the show Williams avoids simple modes of listing, quantification and judgment. Instead, the city becomes an accomplice of the work resulting in frictions, exacerbations, reversals and productive accidents. Similarly, via the city’s contextual complicity, the author becomes the voluntary accomplice, in turn, of the city. This ‘pact’ enriches and extends the de- and re-constructed dialogue between artist and city – both in the gallery-scape and the city-scape.

The multi-layered meanings and potential readings embedded in the exhibition invite a complication of seemingly never-ending contested positions around notions of authorship. We see interesting correlations between his reconfiguration of parts of the city and the way the real city is used and ‘written into being’2 in an everyday sense. The adjustments Williams makes to the evolving construct of his exhibition echo the way that users of the actual city appropriate and customise its fabric, to make it work for them, and not the other way around. 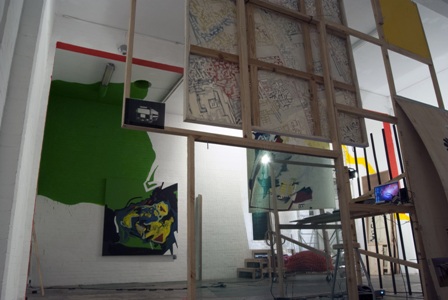 Mark-Making and the Complicity of Context
Williams intelligently exploits various media in the space of the exhibition to construct a series of visual, sonic, painterly and installation-driven continuities and disruptions. Williams’s role in the project is that of a director who rearranges his mode of urban collecting (of material) into an arrangement of potential experiential immersion for the visitors of his ‘city’ within the gallery. His sophisticated understanding of the media at his disposal allows the artist to drive home the significance of contextual conditions.
The artist’s carefully translated interpretations of contextual conditions are a convincing example of practice – led expression. It highlights the all too often (locally at least) harped-on futility of the comfortable perception that two neat halves (practice and research) make a satisfactorily definitive whole. In a counterfoil to this, the captured, collected and reconfigured environment which results from the emergent process of Williams’s, not surprisingly, adds up to significantly more than the sum of its parts.

Alexander Opper is an architect, artist, writer and educator. He directs the master’s programme in architecture, in the University of Johannesburg’s Department of Architecture.