The Fish, the Forest and the Farmer

Part II of our guide to consumer labels focused on the Biodiversity and Wine Initiative, which champions the protection of our beautiful, flora rich winelands; as well as UTZ certification which is aimed at providing farmers with the skills and knowledge of how to practice more sustainable farming methods. In order to support the growth of the conscious consumer, this issue focuses on labels that not only affect those of us on dry land, but further afield as well.

EARTH ISLAND INSTITUTE’S DOLPHIN FRIENDLY TUNA: As long as tuna continues to be fished, dolphins will remain a casualty of this operation. Dolphins becoming a “by-product” of tuna fishing stems from the symbiotic relationship they have with tuna, as they are often seen swimming amongst groups of tuna and are used as indicators to show where shoals of tuna may be. Though as the tuna are caught in large trawler nets, so are dolphins, which when unable to escape often drown. However, Earth Island Institute developed the “dolphin safe” program which aims to regulate, monitor and assess tuna companies around the globe to ensure that their tuna catching practices are not harmful to dolphins and protect the delicate marine ecosystems. According to Earth Island Institute’s research, over 90% of the world’s tuna canners are now considered dolphin friendly, as 300 companies and 51 nations have agreements with to their monitoring terms, including South Africa. For more information about Earth Island’s Dolphin friendly tuna program, visit:http://www.earthisland.org/dolphinSafeTuna/consumer/

RAIN FOREST ALLIANCE CERTIFIED PRODUCT LABEL: The Rain Forest Alliance as a non-profit organization works towards the conservation of biodiversity and the practice of sustainable land use, business practice and consumer behaviour. Their certification program, which began in 1989 is aimed towards encouraging consumers to buy products which have been created in a sustainable manner, namely not infringing on the natural habitat, and ecosystem from whence they came. In 2012, the organisation launched a successful online campaign which provides insight into how consumers can help the organisation protect rainforests from deforestation, unsustainable farming practices and other issues without interrupting their daily lives. The campaign was called “follow the frog,” which can be viewed on YouTube. For more information on the Rainforest Alliance certification program, visit: http://www.rainforest-alliance.org/. 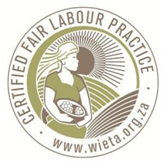 WIETA CERTIFIED FAIR LABOUR PRACTICE WINES: As labour rights, laws and issues are evergreen topics of discussion in South Africa, WIETA, the Agricultural Ethical Trade Initiative of South Africa are doing their part to ensure that fair labour practices are observed in the agricultural sector. Launched in 2012, WIETA’s ethical seal serves as a confirmation to consumers that the wines that carry their seal were produced in a way that did not involve any unfair labour practices, and that reasonable working conditions were adhered to based on meticulous and thoroughly observed qualification criteria. As South Africa is a large producer of wine, this encourages consumers to contribute to the practice of ethical labour by purchasing wines which carry the WIETA seal. A vast number of wines in South Africa have been certified, including wines that come from large estates such as Robertson, Spier, and Durbanville Hills. For more information on WIETAand certification, visit: http://www.wieta.org.za/wieta_wine_brands.php.