I was shown an interesting site a few days ago that draws statistical information from a variety of big agencies worldwide http://www.poodwaddle.com/clocks2.htm . Despite its hilarious name the information that you are able to view – in real time – gives pause for sober thought. It is easy for us to not be connected to the bigger picture because of the hurried way in which our lives are lived. When I saw these numbers roll over, particularly in the energy and environment categories it made me stop to think, is there anything that we can really do to bring ourselves back from the brink of extinction based on our consumptive habits? 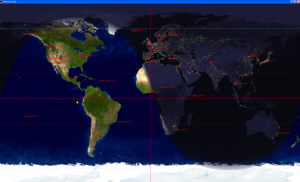 It is so easy to be overwhelmed by the sheer magnitude of the issues facing us as a globe and a case in point is the catastrophic oil gash in the Gulf of Mexico. It is no longer making headline news. In particular the background story is being underplayed and that is BP’s negligence and cost cutting measures which led to the rig being constructed in an unstable way. The long term effects are unquantifiable at this stage, but for sure the environmental destruction and economic destruction that is being experienced is huge.

WWF has predicted that three planets will be needed by 2030 if the current rate of consumption in energy and animal products, as well as water resources continues unabated. Some of us won’t be alive in 2030 but those who have children will need to consider what they can do to ensure their imprint on this planet is renewable, sustainable and will leave behind a legacy their children can gratefully accept.

We all have a responsibility to pay attention and do everything we can to change habits that are wasteful. One person in a collective can change a mindset and groups of people working together can create change that becomes exponential. As Ghandi said, “Be the change you wish to see in the world”.