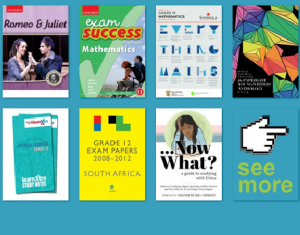 Books are integral to a well-rounded education. Whichever form they take – paper or digital – they

act as repositories of knowledge that can be shared, stored and implemented. It’s a shame, then,

to most South Africans over the past few years.

overseas and, to an extent, on African shores, the simple fact remains that more people in South

Africa lack easy access to books than those who do.

The problems are physical as well as financial: unless you live in or near a large town or a wealthy

city suburb, chances are that bookstores aren’t part of your physical landscape. And the same goes

for the internet and e-readers, too: according to last year’s census, a full two-thirds of South Africans

don’t have regular access to the internet, this despite reports this year proclaiming that broadband

internet access in South Africa had doubled in the two years before the census.

But people still need books in order to educate and entertain themselves. Without bookstores and

internet access, though, how do they get them? In South Africa, usually they photocopy. In almost

every town and village in South Africa, there’s a photocopy shop providing essential services for

books. In many parts of South Africa and the developing world, the photocopier is the most powerful

and effective distributor of physical information.

Of course, the problem with that is that, under most circumstances, photocopying books is illegal.

Recognising this, Arthur Attwell, a Cape Town-based publisher with years of experience in digital

publishing, applied for a fellowship from the Shuttleworth Foundation in order to start a company

that would work to capitalise on and legitimise this practice. He got it, and founded Paperight.

books out on demand. From the time the Paperight website launched in May 2012, Paperight has

got over 50 publishing houses (including big names such as Random House Struik, Oxford University

outlets that have signed up to the service nationwide. Many of these outlets exist in places – such

as rural Peddie in the Eastern Cape, or the sprawling township of Khayelitsha in Cape Town – where

bookstores have never existed before.

are made affordable, physically accessible, and interesting to the greater population. It’s seems like

a solid assumption to make, however. While only 1% of South Africans regularly buy printed books

according to the South African Book Development Council, companies like FunDza and Cover2Cover

Mxit, with sales for some books going into the thousands. The success, too, of print newspapers in

South Africa is also encouraging: the country is one of the few places in the world where newspaper

sales have increased in past years, with almost two-thirds of the country’s population regularly

taking the time to sit down with a newspaper or magazine.

What makes these things successful where traditional bookselling is not, though? Simply: access.

Paperight aims to do make textbooks, novels, and anything else that can be printed more accessible

either too expensive, or physically out of their reach.

And already it’s working. Thousands of documents have been and are being sold through Paperight

outlets throughout the country, and already Paperight has won numerous international publishing

industry innovation awards, as well as an official endorsement from the South African Parliament.

It’s a disruptive innovation that at once recognises the importance of books, but strives to make

them accessible in new, non-traditional ways.

And it will continue to do so until it satisfies its grand vision: of putting every book within walking

distance of every home.

For more information on the paperight movement, watch the video below and visit their website here

Nick Mulgrew is the Head of Communications for Paperight