It was a typical Cape Town winter’s morning, dark with some rain and Dr Miaow – the intrepid cat who lives with me – had been on his early morning (pre-dawn) jaunt. I heard him call and knew the sound well; it was the sound of a proud cat that had brought me a ‘gift’.
In the time we have shared a home I have had a mouse (that I caught with a red plastic cup and relocated) an elephant shrew (dead but still warm) an eviscerated snake (on the door step) and one still alive (sorted that one in the vege patch), a gecko (tail ravaged) and a lizard (stunned but intact). Then it was a perfectly dead bird and soon after a baby bird in a nest.
A massacre of creatures and an unresolved awareness that the creature I love is a hunter and a very adept one at that. His latest prize was spread eagled in the corner of the sun room; a beautiful Cape River frog the size of my open hand and injured, his side was pierced and part of his green and gold skin torn. In spite of this he was very much alive.

I ran to the kitchen to get a plastic dish and lid and carefully placed it in the container and on the counter with a book on top just in case it was planning to fling its frogness into further trouble.

I had no idea what to do. Having had just spent time observing the common platanna frog during a Biomimicry course and marvelling overall at the incredible creature that is a frog, how they use their powerful webbed feet and bow legs to inject themselves through the water they live in, how they can sing and how they can indicate the health of our waterways. I was in amphibian awe. I learned that the platanna frogs were used as pregnancy test frogs between the 1930’s and 1950’s; the reason being they lay eggs like crazy when exposed to human oestrogen. AS a species they are extraordinary and I was deeply dismayed my cat had caught and injured one of them. Like bees; if things are not well with the frogs it sure isn’t a good tiding for us humans.
In its injured state I couldn’t release it back to the river and as grandiose as my healing wishes are I certainly didn’t know how to heal an amphibian. Who would? The vet? 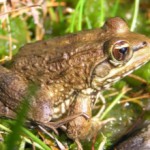 I arrived at his surgery and handed him the dish with the frog in it. He was charming and dismayed – noting he had not been given an amphibian in many years and yet reassured me he would do his best; and so he did. After calling a number of vets in Cape Town he found a willing co healer who was prepared to assist him in anesthetising the frog and performing surgery on its wounds. Dr Miaow’s teeth had pierced his body and they needed to stitch him up.
This was day one. I went out, told friends of the story of the frog so far and was remanded, “you cannot perform surgery on a frog, and the anaesthetic will kill it!” “Just let the frog be, let a dog lick him and the saliva aid it’s healing.” Some of the more bizarre healing advice I was given that night but suffice to say I was not in full agreement with the surgery and vowed to visit the vet the next day to explain further. When I arrived his assistant met me and we exchanged happy chatter about the frog. The vet came out of his back room and brought the frog to me. They had performed the surgery and I must say the frog looked a lot better. He went back to place him under the lights he had set up to allow him to convalesce and I carried on chattering. Then there was an exclamation from him, “He’s gone!” And out he stepped holding the dish with the frog and his fingers in its mouth trying to elicit some kind of response. I asked him to just let the frog be and declared that he was not gone, in fact was he aware that many times a human had been declared dead only for them to revive later at the gargantuan dismay of the mortuary staff? He looked at me and his assistant did too. “It will be alright” I announced and thanked him for his effort. As I was leaving I said to his assistant to let me know the bill (R150) and reassured her frog would live, I just knew it.
As I walked outside I raised my hands to the sky and called on the spirits of healing and of animal guardianship. “Let the frog live,” I pleaded. At home I had a long conversation with Dr Miaow about the need to desist from bringing me any sort of creature with a respiratory system. The phone rang. It was the vet.
‘ “He moved, he is alive!”The joyous cries that broke out made Dr Miaow run for cover and the entire neighbourhood’s furry creatures were brought to cacophonous life by the human sounds of joy because a frog lived!
Two days later the vet called me to tell me he had released the frog – in a river with many other of his kind. “He was a wild one, “he said, “Was trying to jump right out of the container so I could not let him be kept any longer”.
I never saw the frog again but since then as I lay in bed on another winter’s morning, I heard the songs of the frogs – grooving in the river close to where I live. Their song made me so happy and I thought of the one frog adding his voice to their orchestra, the one we did not give up on.

Later I read a beautiful story about a frog that carries a message from earth to heaven; the love note of a prince longing to marry the daughter of father sun and mother moon. No other creature could assist the prince in his quest and carry the message between heaven and earth save the frog. His name was Manu and he would clamber into the water jars of heaven’s handmaidens who came to earth on the silken threads of spider’s web in order to collect water. In this way he facilitated the marriage between earth and heaven.
I think of a gold and brown striped Cape river frog that survived a surgical procedure and despite being in the jaws of Dr Miaow and being declared dead after a huge dose of anaesthetic – he lives, singing his song in a river close to the sea. What a super frog – long live his kind.Image from Wikipedia