We are heading towards the biggest private wildlife reserve in the Western Cape on a once in a lifetime journey. We hope to meet the White Lions that live within the boundaries of 54 000 hectares of succulent Karoo scrub that ripples to the edge of the horizon. The sky is ice blue but its 37C and the clouds are like inverted glaciers melting in the sky. The birds of prey look like stencilled shadows. 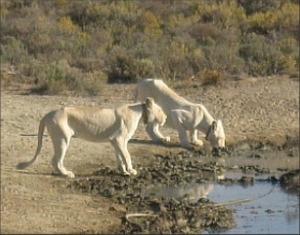 The lodge we stayed in has a well tended indigenous garden and there are myriad birds enjoying the lush surrounds that are regularly watered. Our room was simply furnished with a luxurious stone bath that took centre stage in the bathroom. Double doors opened onto a small veranda offering an expansive view of the ruddy scrub and curvaceous Warmwaterberg Mountain.

After check in, we se  ttled down on comfortable reclining chairs and breathed in the silence. Staring at the mountain and absorbing its peace was like meditating with open eyes. I looked at the clouds and watched them inch slowly across the brilliant sky. In the moments when one is still and completely focused the little things become captivating; like the green butterfly that looked just like a leaf, perched on a branch of an acacia tree gently waving in the hot afternoon wind. Dark shadows in the scrub revealed themselves to be black baboons. Some were foraging and one sat on a well disguised electricity box, also staring in rapt attention at the mountain before it. The heat shimmered off the rusty earth. Twenty minutes here and one can make up for the years looking out of small, high rise windows and the boxed chambers of offices.

The Riverine Rabbit lives here. It is the most endangered rabbit in the world and number 13 on the most endangered mammal list. It is truly the last of its kind and it made me wonder about finality, the last chance we are not aware of until whatever it is, is gone. Continental collisions and cataclysmic crashes created a place for its genus to survive but for how much longer? This ground hails from the Devonian era, over 360 million years ago it was under water and today you can pick up fossilized shells that look like discarded meteorite chewing gum.

The late afternoon game drive brought us together with our fellow guests who were much older than us. They understood finality and take pleasure in doing things they should not do. Like climb into Land Rovers shortly after a second hip replacement operation. Richard owns half of Shropshire so he is a man quite used to getting his way. He made it into the vehicle but his wife’s friend, Annie, commented she couldn’t possibly “get up there”. Her octogenarian partner, Tom, encouraged her, “Of course you can my little mountain goat” 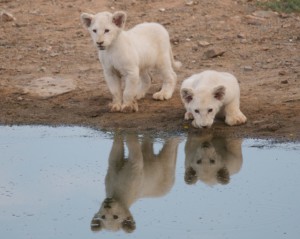 and a miracle occurred, her limbs loosened and suddenly sprightly she managed to get into the vehicle.

We drove for what felt like a long time and we saw Eland, Gemsbok, Kudu, Giraffe and Elephant with a two week old calf that looked as if it was moulded out of fresh grey plasticene. Its little ears and trunk were still very floppy. The acacia trees were in full yellow blossomed bloom. But there were no Lions and Richard declared, “I’m no good after six o’ clock without my whisky,” so we returned to the lodge accompanied by an ice cold wind. The Milky Way was offering us stars in three dimensions out of the black night sky.

What does a million years feel like, what does 85 feel like, what does five feel like? Whatever your age, there is texture and composition and energy in the spaces you inhabit. Being in a place like this reassembles your molecules, as you breathe in the magnificence of time and its endless patience.

This is a space where you observe, from crafted rooms, Land Rovers, and deck chairs life as it is without intervention. But man has contributed by bringing in the Cheetah and Rhino, Buffalo, Hippo, Elephant and Lions and all the herbivores needed to create a game haven. People travel here from every corner of the globe and pay vast amounts of money to eat and drink in the privilege of this space and to watch animals that take their breath away.

The next morning we set out very early on our quest. A cowed Black-backed Jackal rushed into the scrub, and we saw a Bat-eared Fox running faster than it should. Suddenly the journey of Giraffe we could see began galloping as fast as their long legs could carry them and they were pursued wildly by a herd of Springbok who couldn’t run any faster. The kill was swift, silent and over within a minute. The surviving herbivores looked on with rapt curiosity as the female Cheetah took her kill to her three young cubs and they began to devour its still warm flesh. Richard and Annie watched the whole episode from super high-tech binoculars. I watched through the dust and changes in the light. It was startling, abrupt and irrevocable. We sat there as they made observations ala Attenborough.
The ranger got out of the vehicle and used his satellite tracking device before he realised that two tawny Lionesses had just moved into range. They were very curious about the commotion and lay down quite close to the vehicle, smelling the air and panting slightly. “Tremendous”, remarked the English tourists, almost unanimously. But the ranger was getting impatient to serve the morning tea and hinted our time of lingering was up until Tom stated, almost petulantly, “This is my last chance to see a White Lion.” This was his last trip to Africa and the ranger absorbed this fact as did we, so, with our complete agreement, the beverage break was sacrificed and we set off again, this time driving faster and with a sense of urgency. 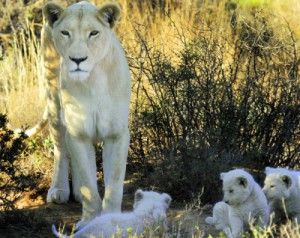 Time became condensed and thick and stress crept into all our spheres. The bumps and grunts of the vehicle jolted us out of any spaced-out reverie. The clock was ticking and the sighting had to happen soon. We kept driving and scanning the horizon until, as if on cue, a white smudge was seen moving in the distance and two White Lionesses appeared like apparitions in the landscape. They were lean, hungry, collared and sinuously making their way toward a small water hole. Everyone was speechless as the vehicle pulled up within spitting distance of them. No picture can prepare you for the sight of this diaphanous carnivore, which inhabits its territory like a regent. They are not albinos; they are a genetic rarity and are revered by the Shangaan who believe when a White Lion is born it heralds a portent for change. They are powerful symbols of hope and are extraordinarily rare in this world.

We sat in silent awe watching their breath make faint mist in the cool morning air. I was acutely aware of the metal limbed vehicle and smelled the belching stench of diesel. I felt my inability to hunt in order to stay alive in a place where there were no guarantees and prayed these Lionesses would be able to. The old travellers felt as if they had been granted a wish for which they could never say thank you enough.

The Lionesses eyes are the colour of the full moon and they looked at us briefly. We were utterly insignificant to them. We watched them lap at the water, stretch and roll on their backs, and prick their ears and wrinkle their noses with feline curiosity at the scent of Kudu a safe distance from them. “Would they hunt today?” Tom asked. “They need to,” replied the ranger.

He was getting edgy and apologised because he had to take us back to the lodge, citing all sorts of trouble he would get into if he delayed any further. Tom and his friends were silent, we were too. The White Lionesses ambled their way away from us and we reluctantly headed the other way back to the lodge knowing it was the last time we would see them but not knowing what would become of them.

What remains is a poignant memory and the bittersweet sense of transience which defines life in the places we inhabit. I will go back if I can, but it is as unlikely as it is for Tom to return to the land that granted his wish. He will move on to the next destination as all travellers do.