Hormones and the Endocrine System: An Ayurvedic Perspective

Your body is a perfect system that functions mystically without you ever needing to tell it what to do. This is why understanding how it works can help you seek the best medical advice when things are not working as they should.

What is a hormone?

This enigmatic beast that gets the blame by so many (male and female) for their joy or sorrow, remains a mystery.
In the scientific community, there is great honesty about the actual lack of understanding of the endocrine function but this is what we do know and it starts with an understanding of the glands that produce the hormones.

Hormones are behind every function in your body and the reproductive functions and menstruation of women are only one aspect of the hormonal system. Hence, anything that disturbs other aspects of the endocrine gland will tend to disrupt the menstrual cycle. These include dietary, climatic and emotional disruptions.

The first part of the endocrine system is actually not a gland. It is the front part of the brain located in the hypothalamus. It is connected to the thalamus and the pituitary gland and serves as a bridge between them. Thus it is one of the main connections between the nervous system (thalamus) and the hormonal system (pituitary). The hypothalamus controls body temperature, hunger, thirst, water balance, and sexual function, among other things. It is related to emotions and sleep, and governs all of this by regulating the automatic functioning of the nervous system through the pituitary gland. Not all of its functions are completely understood.

The second part of the endocrine system is the pituitary gland. This is the brain of the hormonal system. It relates a complex variety of hormones that control growth, protein synthesis, sexual functions, and the metabolic function in general. It actually controls so many hormone secretions that not all have been isolated or understood. It controls these secretions by receiving information from the brain (the hypothalamus either stimulates or inhibits) and the many other endocrine glands, via a complex feedback system.

The third endocrine gland is the pineal gland. The role of the pineal gland is perhaps the one least understood by modern allopathic medicine. The pineal gland produces metatonin (along with the serotonin). In fact, there is much that is unknown about the function of these two hormones. They are known to interact with the adrenals, thyroid, testes, and ovaries. While theories abound, much more research needs to be done, since any hormonal imbalance can greatly affect the whole endocrine system.

Ayurveda considers that one major function of the pineal gland is to link the physical and the subtle bodies. Before understanding these two glands we need to understand the Ayurvedic aspect of human beings.

Ayurvedically a human being is two halves joined together. They are made up of two poles: SHIVA (positive) and SHAKTI (negative). There should be always a balance between these two poles. This is controlled by a point between the third eye and the back of skull. We call it TRATAK CHAKRA. This controls all functions of our body.

The fourth gland is the thyroid. It controls the basic metabolic function of the body. It also controls growth in the young and has a role in regulating calcium in the blood. But yet again not all of the functions of the thyroid are understood.

The fifth endocrine function is controlled by the Parathyroid which regulates the levels of calcium and phosphorus in the blood. This balance is critical for good bone growth and maintenance.

The sixth endocrine gland is the thymus. Much of its role remains a mystery to modern science but it is thought to play a role in growth and immune function.

These three glands are governed by the 5th Chakra (VISHUDHA). This is the main centre of artistic expression and if there is a blockage in this energy system, you will experience problems with the hormones secreted by the glands.

The adrenal glands are probably the least understood by laymen, yet they are the most important to overall health. Their simplified functions include the immune function, digestive metabolism, water metabolism, sexual metabolism, and nervous system function. They also have a very important function as transmitters throughout the body and function as a feedback system to the pituitary gland. They are intimately related to the nervous system because of this feedback function.
During pre-menopause and in menopause, the adrenal glands completely take over the production of progesterone and are responsible for most oestrogen production after menopause. They are thus very important for the health of women throughout their lives. One of the hormones produced in these glands is the now-famous DHEA. 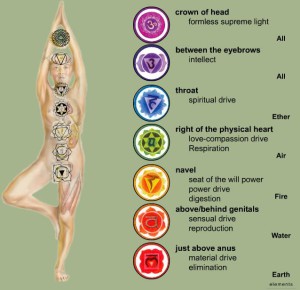 The eighth endocrine gland is the pancreas, which functions as both a ducted and ductless gland. The pancreas works closely with the adrenal gland to digest carbohydrates (complex sugars), protein, and fat. It is the adrenal gland that controls this function, but it is the pancreas that secretes the bile necessary to digest these nutrients.
The above glands in Ayurveda are related to 3rd and 4th chakra. These two energy centres govern emotions and the metabolic system.

Finally, we have the testes and ovaries. Both have a known relationship to our immunological function, supporting Ayurvedic understanding that the seventh Dhatu (tissue level) is the source of immunity. Abuse weakens the immune system: not only overindulgence in intercourse, but sex without love and unnatural uses of the sex organs.

The functions of the group of hormones, known as oestrogen, are activated by the follicle-stimulating hormone (FSH) which is released from the pituitary gland. When FSH comes to the ovaries, oestrogen production increases and an egg ripens and becomes ready to be released.

In addition to the main endocrine glands, there are other organs which produce hormones important to bodily functions. The effect of taking estrogenic medications – birth control pills, ERT or HRT – on the prostaglandins is not completely known and should be questioned carefully.

In Ayurveda these come under the root chakra and sex centre and are responsible for desires, sex and procreation.

It should be stressed that, while modern science has made huge progress in understanding the individual functions of the endocrine glands and hormonal secretions, much less progress has been made toward an understanding of the complex interrelationships between these glands. In fact, the overall functioning of the body is so dependent on these hormones that even a vitamin or mineral deficiency can play havoc with the body, because an endocrine gland may be affected by this deficiency.
Problems with respect to the thyroids are a clear example.
In this aspect, Ayurveda can provide us a much better overview of the total functioning of the endocrine system. This is not to discount the biochemical understanding of allopathic medicine, but rather to provide a broader context in which to use the biochemical information. Used in conjunction with an overview, such information can improve your health. But if used within the confines of a purely mechanical model, this information can produce huge imbalances and dependencies in the body.

It should also be pointed out that the hormone group of oestrogen and progesterone do not exist in a natural state outside of the human body, either in animals or in plants. The advantage with plants is that many herbs provide a simple steroid base that is the base of all hormones in humans and animals. The use of “hormone-promoting” herbs provides just that – support for hormone production. The disadvantage is that, in some cases, these compounds may not be strong enough to make a direct change in a seriously imbalanced system. The advantage is that they are not strong and invasive. They work to support the body’s natural functions and so aid the body to balance itself.

In most traditional cultures menopause happens relatively effortlessly for the majority of women. Only a small percentage experience difficulties. Even today, as many as half of all women, have little problem with declining hormone production. On the contrary, many women are elated and happy about the change. These facts and attitudes, however, do not lend weight to the massive industry that is now based on ‘managing’ menopause.