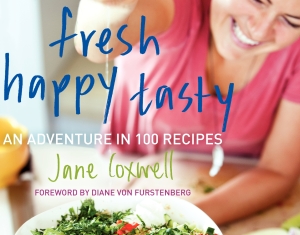 What a happy zingy book for summer documenting the delightful recipes created by Jane. In 2009, she joined the crew of Eos, Barry Diller and fashion designer Diane von Furstenberg’s sailing yacht – a position that has taken her throughout Southeast Asia, New Zealand,Australia, Papua New Guinea, French Polynesia, the Caribbean and Central America.

Her specialty is fresh, healthy meals that celebrate flavours from around the globe, without the food being extravagant or ornamental. Above all, Jane believes in a low-key approach with the most delicious dishes being a result of fresh food that is thoughtfully prepared.

Here is a recipe for you to sample:

This salad is like a pea family reunion. It’s very simple, but the goat cheese makes it a bit more substantial and luxurious. The inspiration for this recipe was a request for a bright, all-green salad. You can stick with using peas, or add whatever other green vegetables you find at the market.

Maldon or other flaky salt

NOTE : Don’t be tempted to dress the salad too far in advance. The lemon can discolor the greens
and ruin the aesthetic of the dish, which, in my opinion, is half the pleasure of it.

She grew up in the Cape wine region of South Africa. She trained under Chef David Higgs, whose restaurant
Rust en Vrede was rated one of the best restaurants in the world and who now heads up Five Hundred, The
Saxon’s signature restaurant in Johannesburg. She served as chef for former Ambassador Kathryn Hall, cooked
for fundraisers for Hillary Clinton, and later became executive chef at Hall Wines in Napa Valley, California. In
2009, Jane joined the crew of Eos and divides her time between New York City and the rest of the world.