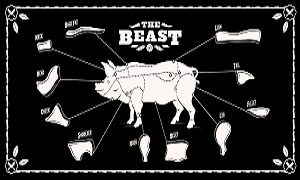 Not pleasant I know but if you are someone that enjoys bacon, gammon or anything pork related, wouldn’t you like to know where your piggy comes from and what it has been fed before you yourself consume it? While there are many South Africans that are still in the dark about the practices that occur on commercial pig farms, there are those among us getting out there and asking questions about the journey of our pork. One such group is “Going the Whole Hog,” started by Activist South Africa; a campaign which began last year that aims to inform consumers about the conditions on factory pig farms and the health consequences of consuming “conventional” or factory-farmed animals. 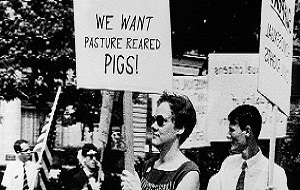 Following on from news earlier this year about emerging pig farmers, see article here this is exactly the kind of activism our agricultural sector needs in order to aid the growth of small scale farmers as well as promote a transparent relationship between the producers of animal products and the consumer. While SAPPO (the South African Pork Producers’ Organisation) has been dragging their heels about the legitimacy of the campaign saying it is “nothing more than a front to ensure the total decimation of the reputation of the pig industry in South Africa,” the campaign has received positive responses from concerned consumers, media, retailers, producers and restaurants across the board.

The crux of the issue that involves SAPPO is around the treatment of pigs on commercial pig farms, such as practices of keeping sows in gestation crates for a considerable part of their lives, which allows for very little movement. Pigs are in fact very sociable creatures and if given the opportunity, will roam around up to 15kms a day.

There is also to concern over castration in piglets, routinely performed without anaesthetic. In terms of health consequences for the consumer, farmed animals are routinely given antibiotics and are predominantly fed a genetically-modified diet while living a stressed and unhappy life, which pumps the meat full of stress hormones like adrenalin and cortisol – this meat containing a cocktail of health hazards that would best be avoided is what ultimately ends up on the consumer’s plate.

If you would like your pork to be free range, free range pork can be bought from the following places:
http://www.braesidebutchery.co.za/contact.php
http://www.ffmm.co.za/