Every now and again, we as people have to admit to some uncomfortable truths. For example some of us would rather spend more time with our friends than with our family and issue excuses to avoid such commitments, we know we should take our own carrier bags to the shops but often just end up buying plastic bags instead, and probably the most uncomfortable truth we never admit to is that we would prefer someone else did the ‘good’ work – after all aren’t we just too busy to think about doing good at all? 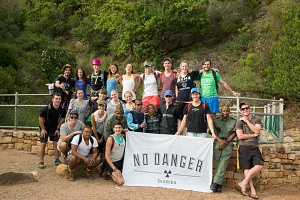 Even though contributing to philanthropic endeavours can be last on our list we have been completely inspired by a recent project budding in Cape Town has taken ordinary “charity work” and turned it on its head, its side and spun it around into something especially appealing. The “No Danger Diaries,” started by a group of four friends aims to make a difference by taking philanthropy out of its conventional space and combining it with exciting, entertaining and sometimes slightly outlandish activities that make for great stories for good causes. 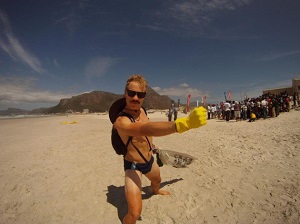 As it says on their website, these friends are “four regular dudes who want to do some good in the world- while having fun;” fun in this instance includes anything from performing a puppet show for orphans, (in full costume) or taking a visually impaired person up a mountain, to more audacious tasks such as cleaning up an entire beach in a speedo or donating a week’s worth of living expenses
to charity by living below the breadline for five days (on less than R20 a day).

It could be said that the growing success of the No Danger Diaries can be attributed to its combination of philanthropic deeds; but at the same time raising awareness for their cause by ticking tasks off their list which may not include a charitable element, but have great entertainment value (such as running down Table Mountain naked or doing a pub crawl on a donkey) which ensures visitors return to the site. In addition, the crew offers anyone the chance to be involved in some of their adventures, fostering a sense of community and good work through fun-which is arguably what their cause is all about. 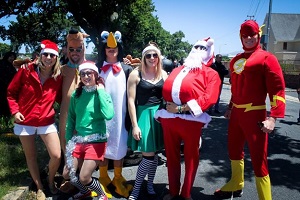