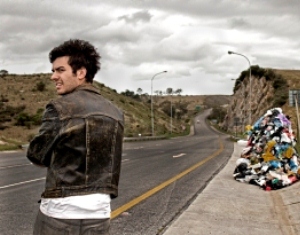 ‘I suspect I will get horribly drunk,’ laughs twenty-three-year old sculptor Francois Knoetze when asked about his plans for the immediate future. At the time of writing, the soon-to-be Rhodes BFA graduate is applying the finishing touches to his final exam exhibition, while also preparing to leave his long-time home, Grahamstown.

The young artist, who came to wider attention as a finalist in the 2011 Absa L’Atelier and Sasol New Signatures competitions, has lived in the small Eastern Cape town for most of his life. Like most locals, Knoetze has mixed feelings about abandoning the place. ‘At times, the fact that it is comparatively secluded from the South African art world seems to place one at a disadvantage when trying to get your work seen,’ he muses. ‘On the other hand, the town is like a petri dish, with a population from all corners of the country, making it seem bigger than it is.’

It was in the art department of Rhodes University that Knoetze honed his skills in what he refers to as assemblage sculpture. ‘I had only ever painted before university,’ he explains.

Working with ‘non-traditional’ sculpture materials makes one feel somewhat like an inventor. There is no manual for making art with trash or found objects, simply because the variety of things you can use is so immense.

Knoetze attributes his attraction to these ‘non-traditional’ materials to his upbringing. ‘My father and grandfather have instilled in me a sense of pragmatism and frugality which are inseparable from my daily processes of making art,’ he says. ‘My mother’s love of the arts has also had a huge influence on me. As a young child, I would spend hours paging through threadbare art books of old masters which she had recovered from a pile discarded by the public library destined for pulping. I remember being perplexed by the fact that someone would throw something as precious as those books away.’ Knoetze’s interest in saving items others might discard was further developed in his childhood: ‘Eyeing out a good buy is, so to say, in my blood. My grandfather often buys broken appliances and furniture from auctions with the intention of fixing them up, and bragging about how little he paid for them once fixed. Learning to see objects for what they can potentially be instead of what they presently are has been a huge part of my approach to sculpture.’

This belief in the potential, as opposed to the prescribed, value of things is perhaps clearest in Knoetze’s 2012 Refus. The performance piece and short film follow a giant moving sculpture made from Knoetze’s material of choice, trash, as it wanders Grahamstown. Refus is the story of a little slice of the local dump’s transformation from inanimate waste, to mobile, sentient creature,’ explains Knoetze. In the film, that creature skulks around town looking like the love child of Stig of the Dump and a demon, amusing and terrifying locals. ‘As could be expected, the townsfolk are less than hospitable to the resurrected, wandering pile of rubbish, and after being ridiculed, rejected and harassed, Refus is captured and ultimately executed by being converted into a block of compressed cans.’

The piece caught the eye of choreographers Gavin Krastin and Alan Parker and digital artist Rat Western, who asked Knoetze for permission to reuse Refus in their 2012 National Arts Festival performance art installation Discharge. This isn’t the first time that Knoetze has worked with theatre-makers: ‘After matric I took a gap year, working as a stage rigger in London,’ he explains. ‘But as a Grahamstown local, I have been fortunate enough to be exposed (willingly or by force) to world-class theatre presented by the NAF and Rhodes Drama department from a very young age.’

Knoetze’s preferred materials, perhaps like his viewers, seem to be those with their own particular history. ‘As Gillian Whiteley notes that “when paper is soiled or lacerated, when cloth is worn, stained”, torn, when wood is split, weathered, or patterned with peeling coats of paint, when metal is bent or rusted, they gain connotations which unmarked materials lack’, he quotes. ‘I have tried to reach a level of acquiescence with the dirtiness of being human. With regard to the current global environmental crisis, I feel that we could learn a lot from the people who are forced to survive off our rubbish. Although I am always well aware that I am there by choice, not necessity, I find it strangely satisfying to dig around a dump for grimy treasures.’

Genna Gardini is a writer and poet based in Cape Town.

Error: An access token is required to request this resource.
Type: OAuthException
Solution: See here for how to solve this error
A Bright Idea

The Limitations of ‘Half’ and ‘Whole’
Scroll to top