You are here: Home1 / de zeekoe 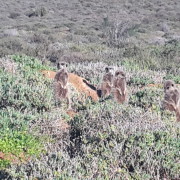 I’ve been on several journeys to meet creatures that have taken me to extremes I probably would have avoided under ‘normal’ circumstances, like jumping into jelly fish infested waters in Mozambique to swim with the wild dolphins or walking through a spider (huge and yellow) canopied forest to catch sight of the toucan in its wild environment. So when I received an invitation to meet the meerkats I was utterly delighted because they are within the province I live in and it didn’t involve international travel. Plus, my best friend wanted to join me as seeing meerkats in the wild was on her vision board and bucket list. Two wishes we could make come true. 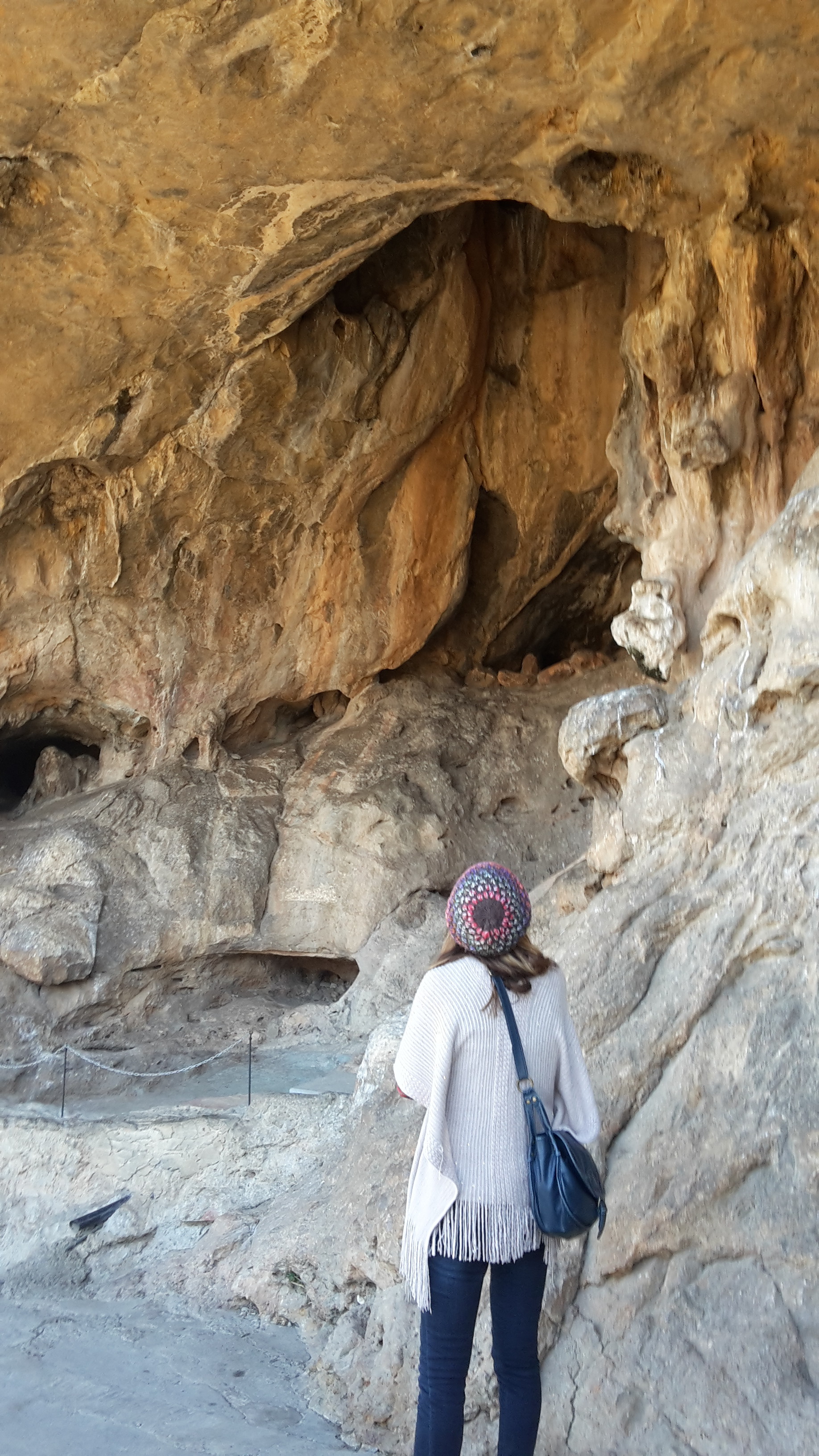 Contemplating the entrance to the Cango Caves

We chose the iconic route 62 to take us all the way to the Klein Karoo and, as the Overberg region faded into the rear view mirror, the landscape changed to the short scrub that epitomises the Klein Karoo. Although I have driven this route a number of times, I felt a new sense of wonder as the scenery offered up its treasures of simple beauty. It takes about five hours to reach De Zeekoe driving from Cape Town. Oudsthoorn is a mere ten minutes away from the guest farm and there are many delightful adventures to choose from for those who love hiking, cave exploring, jumping out of aeroplanes and playing in the great outdoors.

I remember being put on the back of an ostrich when I was four years old (I still have the picture of a gleeful little face smothered in feathers – the ostrich looked pretty happy too) and noted that ostriches are still truly wild birds. We stopped alongside the road on the way to the utterly gob smacking Cango Caves and within a few seconds a whole flock of curious birds came up to the fence to look at me looking at them. It was a strange moment when I realised I may look just as odd to them as they did to me, but I didn’t want to ride them or eat them; just admire their remarkable beaked faces and huge glossy, long lashed eyes.

De Zeekoe is a family run guest farm and the staff are warm and friendly which is a great treat having just survived a five star experience at a hotel that shan’t be named who had robotic staff and charged you for using the internet after check out. Not so at De Zeekoe; the room we stayed in was gorgeous, the beds dreamy and our look- out point gave me an uninterrupted view of the setting sun and flocks of birds returning to home base. After a delicious dinner with home- made bread and butter and an excellent wine from their comprehensive wine list we decided on an early night because we had to be up at dawn to meet our guide for the meerkat introduction. 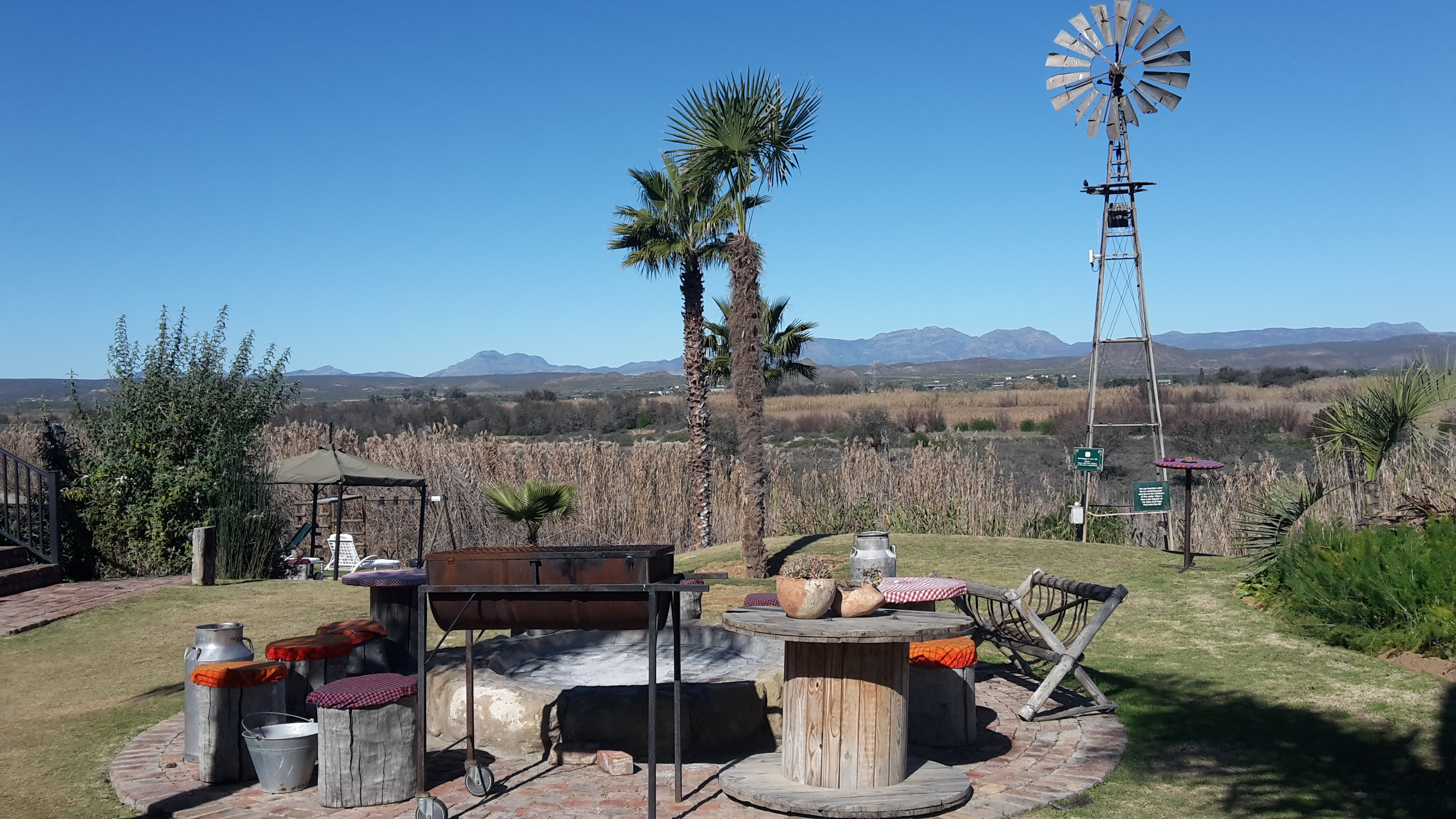 DeZeekoe’s vista across the Klein Karoo

The Klein Karoo at dawn sounds like song birds singing and as the sky changed out of its dark hued clothes in favour of pink and tangerine swirls I watched the blue moon (the second full moon in one month) fall back into the horizon like an iridescent lozenge and took short breaths in the ice cold air. At breakfast I had read on one of the sugar sachets, “The miracle is not to fly in the air or to walk on the water but to walk on the earth.” I was feeling that as I stood on the piece of earth that forms a small part of an 80 hectare conservancy that is home to about 44 families of meerkats.

Rudolph, our guide for the encounter, gave us a lesson in manners (things we had to observe) in order to make our encounter with the meerkats as successful as possible. I felt like I was being briefed before an important meeting but I was distracted by the African shell duck, thick billed lark, Cape sparrow, malachite sunbird and scrub robin that were playing in the bushes around our tea table. 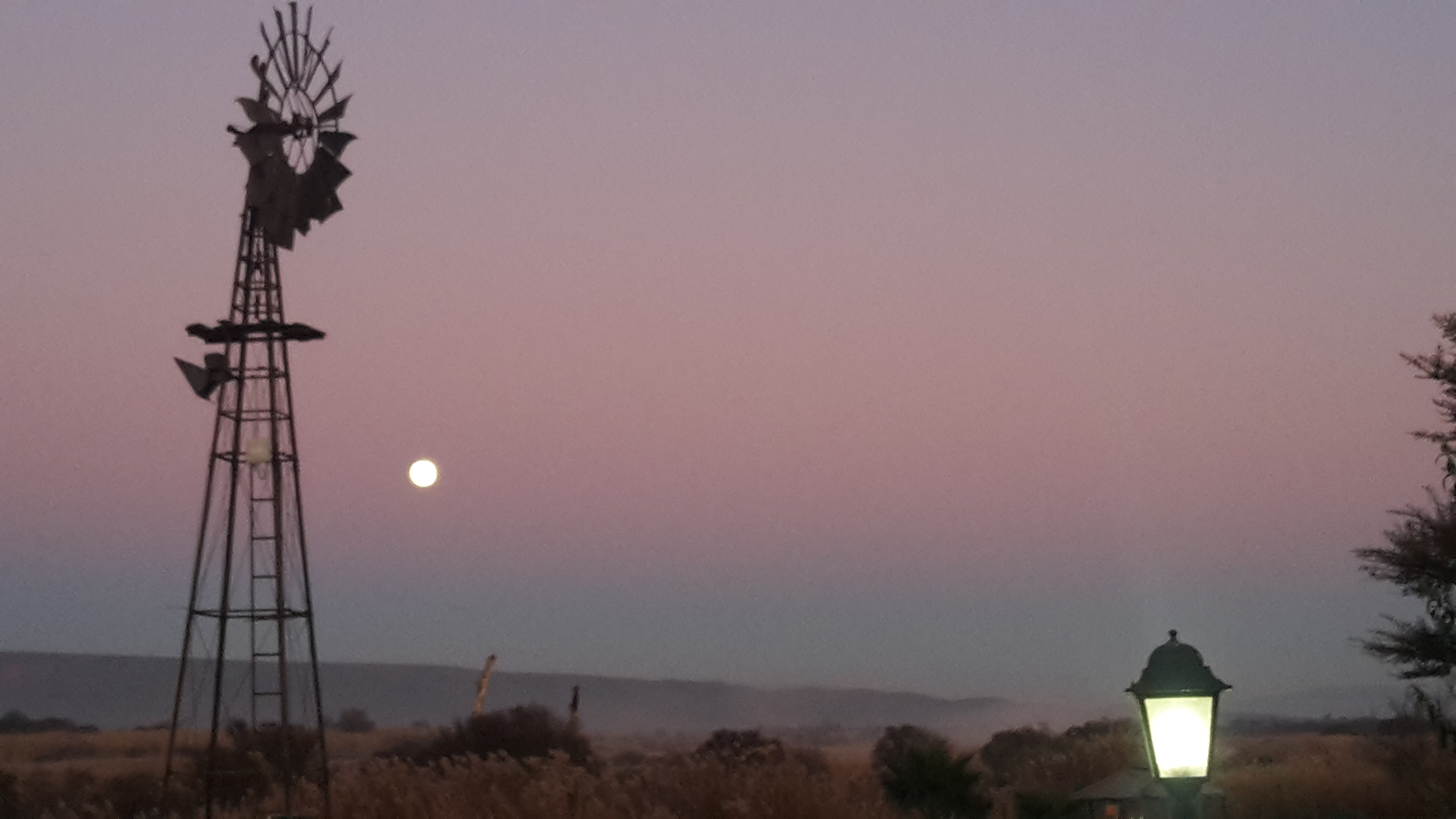 The ‘blue moon’ setting as the dawn wakes up the sky

There are only three other places in the world where meerkats can be observed but two of them charge extortionate prices and involve feeding of the animals, which according Rudolph “is a zoo act”—not an act of quiet observation. Rudolph was a treat and his knowledge of the meerkats wholly entertaining as he clarified that he was fluent in English, Afrikaans and nonsense.

The meerkats are part of the Shy 5 grouping, four of which are nocturnal – the aardvark, bat eared fox, aardwolf and porcupine. There is nothing shy about the meerkats however and they love to frolic in the day but, before games, you have to wait for them to emerge from their burrow – one by one. The first meerkat to emerge (looking like a bandito) is the sentry and without any ado he popped his little head up over the burrow to find seated in front of him a row of humans, sitting down bundled in blankets against the bitter -3C morning. There are places colder than this Rudolph assured us, like Steynsberg in the Greater Karoo where the curtains freeze to the window frames.

As Rudolph was reinforcing the fact that we had to be super polite, we were given lengthy descriptions about why the meerkats are utterly not. As the meerkat sentry stared into the distance, his lithe little body propped at a right angle on his little striped tail; his paws were in reverse Namaste’ pose as he ruminated on the possible dangers out there before murmuring a little encouraging sound and the next one popped up out of the burrow. These sudden appearances of the family unit took about an hour before the whole mob were standing with their tummies facing the rising sun that would serve to warm them up enough to begin a day’s foraging and gallivanting before returning to the burrow at dusk. Rudolph said he thought their tummies acted like little solar chargers and as my frozen fingers tried to write notes I wished I had some sort of device to keep me warm too. 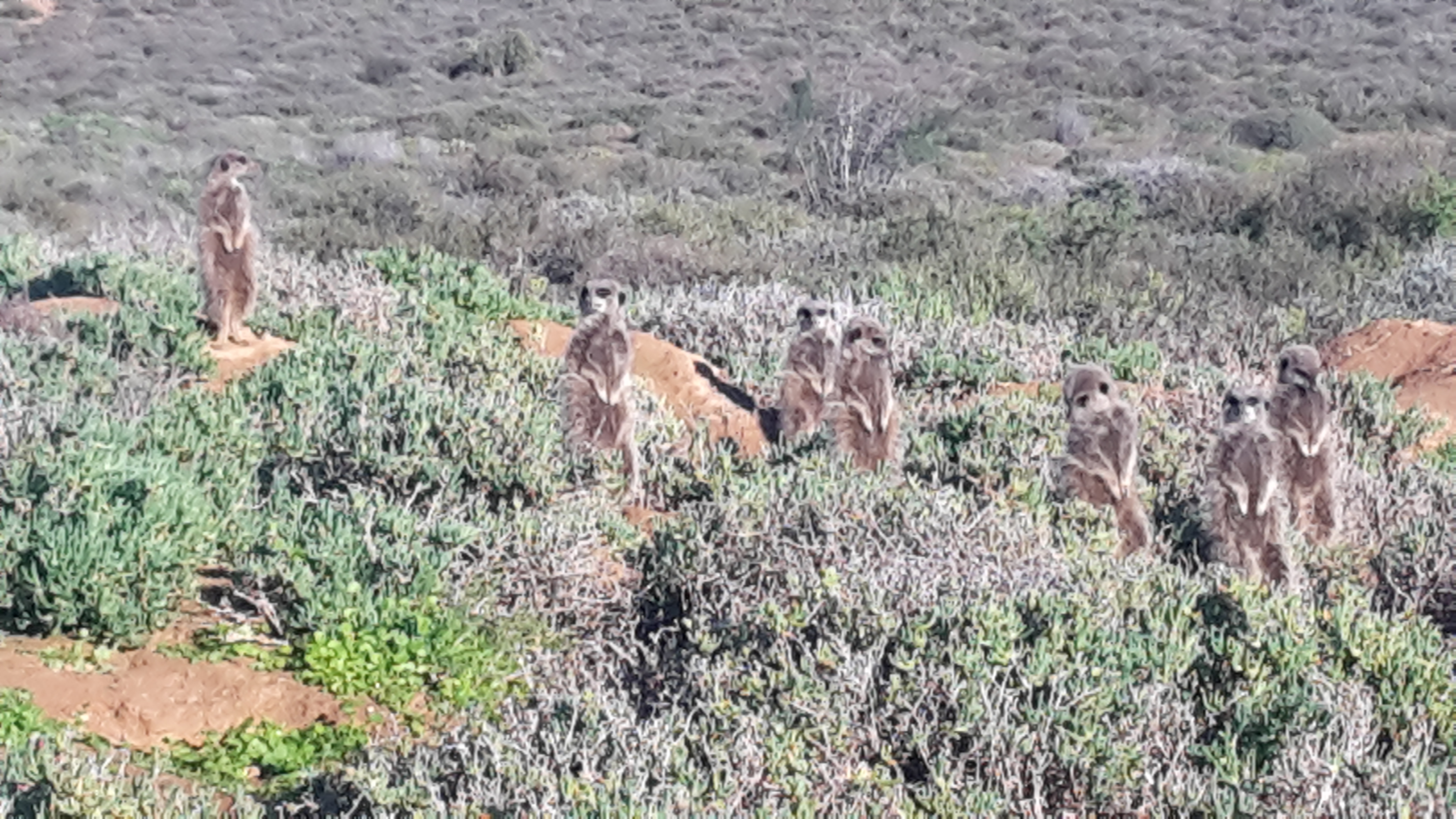 Poised, purposeful observation from the meerkat scouts and family

Despite the elements, this extraordinary few hours of contemplation of a creature I have been curious about was charming and a perpetual smile settled as I observed their charm as each in turn looked up, looked out, and looked from left to right for things we cannot see or hear.

Despite their tiny size, they are great excavators and can dig twice their body weight in one minute and they do not tolerate strangers, do not share their food, and, despite the cute quotient, do not make for well adjusted pets. Rudolph said if left to their own devices they could kill a puppy. Apparently some tourists have complained about the meerkat observation – one American with his ridiculously large camera chastised him for not having ‘control’ over the animals, and one horrified Russian was furious the animals weren’t in cages.

Thankfully our group was more evolved and were happy to sit and watch them unbound and free as the rising sun warmed us all enough to be able to truly drink in the space that held us all. Every creature on earth has a personal space bubble and Devey – the man who has spent his time with this particular family of meerkats noted that theirs is about 250 meters. They have selective hearing which is why we could talk but were forbidden to stand up as that would take us out of the submissive stance of the seated group.

As they warmed up they began to play like kittens and their murmurations increased. I looked around at the horizon and the snow capped mountains. At my feet was a funnel webbed spider’s web covered in beads of ice slowly melting.

Once warmed up enough, the mob scuttled off in search of food, and for males beginning their search for territory, a possible female meerkat to steal away from her family unit to join him. Yes they do that too.

“What is it about the games we play that keeps us together in this world?” I wondered as my friend and I thanked Rudolph for such a treat and headed off to our world to find something equally good to eat. We were glowing and happy and full or our own murmurations. Much later that day, as the sun was setting and my friend was taking pictures, two ridgeback puppies emerged from the farm house to playfully cause chaos, tumbling on her and licking her ears and chewing my notes to self. I laughed at their strategic intervention reminding us to keep playing.

To book at DeZeekoe Guest Farm and meet the mob – visit http://www.dezeekoe.co.za/oudtshoorn1

Error: An access token is required to request this resource.
Type: OAuthException
Scroll to top