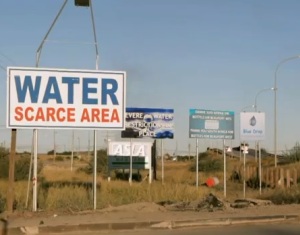 Last week, the Minister of Water Affairs made a large splash in local media for her plan to reform several key water access laws. Included in the mix is the application to have fracking listed as a ‘controlled activity’- ostensibly creating a climate under which water use in hydraulic fracturing is carefully controlled and monitored by government.

This sounds fine and well, but many critics believe that there is no possible scenario- even in the best case- that water use in the water scarce Karoo can even be controlled enough to avoid all negative impacts.

Furthermore, the document clearly calls for a focus on ‘productive use of water that aligns with the economic imperatives of the country’(fracking perhaps? Surely not…).

South Africa as a whole is in a very tight position with regards to water, with 98% of available water already allocated across the country. Careful management of our water resources is vital for the future, and deciding how the scarce 2% is divvied up is of utmost importance.

Concerns of corruption,vested interest, lax law enforcement, poor fracking practise and more are not unwarranted, giving the high risk nature of the technology and the close relationships that exist between the corporations and our lovely government officials.

Unearthed, an independent documentary produced by a South African crew takes a look at fracking from a global perspective and reveals the fascinating word play and semantic arguments that pro-fracking proponents offer to derail anti-fracking sentiment. Take a look at a segment of their documentary that showcases the perspectives of South African’s below:

Not only are the water use issues of fracking of serious concern, but the Treasure The Karoo Action Group is highly critical of one of fracking the Karoo’s most commonly vaunted benefits- it’ll create jobs:

“TKAG’s concern is based on the fact that our leaders appear to have desperately swallowed the first figures that they’ve been offered [by Shell et al] and that their ears and eyes are closed to warnings of what is emerging, in credible reports, from the US. The government is obliged to consult openly and honestly on this huge and lasting decision for SA.”

But, despite the concerns from the public, it is very clear that the government is pushing ahead with their plans to license shale gas exploration by the 2014 election cycle. It seems likely that the ANC will be aiming to ride the job creation ticket in their upcoming campaign.

To support TKAG’s fight to have exploratory drilling taken to court, visit www.treasurethekaroo.co.za

The government’s decision to have fracking declared a controlled activity is open for comment and may be foundHERE . Take a look. It’s clear that this timeous water focussed document that calls for “radical transformation of productive water use” in South Africa is a serious concern to all.

Another chance to justify environmental destruction for the ‘benefit’ of our economy.

If we want to live in a real democracy, we must have our say through all the channels available to us. Casting a ballot once every 4 years is not living democratically. Living democratically is shaking apathy, making your voice heard, asking questions and demanding answers.

Want to join the discussion?
Feel free to contribute!

Error: An access token is required to request this resource.
Type: OAuthException
Solution: See here for how to solve this error
Hagedash the Hadeda