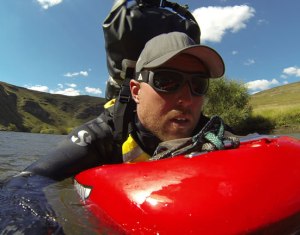 Water is life. No-one can dispute this fact, which is why it is truly unbelievable to see how polluted South Africa’s river sources are and to acknowledge the crazy decision by the current government to allow fracking for shale gas in the water stressed Karoo basin to begin. One of South Africa’s most extreme water champions comes to us in the person of Ray Chaplin who set himself a Herculean task to undertake a solo journey along South Africa’s longest river to draw attention to the pollution clogging its waterways. He is now the first person to riverboard the entire 2,400km length of the Orange River. Along the way he fended off land pirates intent on stealing his equipment, had to unfreeze his wetsuit (and fingers) on a number of occasions, broke his ribs and spine and had rather close encounters with wild creatures. Undeterred he completed the journey and as a result has brought much of the river’s polluted state to the attention of the people living along its banks.

The journey was sponsored by Plastics|SA and Nampak Rigid Plastics Orange River Project, which is one of the largest converters of plastic in South Africa.

During his journey
Ray held school talks, initiated community clean-ups and helped to raise awareness about the impacts of river pollution. Over 9500 learners benefited from his remarkable energy and over 5500 bags of litter were collected through clean-ups. The kids loved learning from Ray which is unsurprising considering his enthusiasm and ability to tell a great story.

When I saw the size of the riverboard I could not actually grasp how he could have undertaken this journey alone with no back-up crew or support vehicles. He carried absolutely everything with him – his own tent, kit and food all weighing in at around 35kg. He managed about 18-20km on a normal day and due to his frugal diet lost 16 kilogrammes in weight. The physical achievement is one thing but how does one measure the mental effort to remain true to one’s intention while being alone for so long and having to battle extreme weather conditions? At the end; 246 days after departing from the Orange river source Ray arrived in Alexander Bay on the Atlantic coast having not only successfully completed 2460km of riverboarding but also 21 school presentations, two community meetings, one recycling Indaba, one International Marine Debris Summit, two Expos and 11 Radio interviews to spread the word that plastic should not be ‘thrown away’; it needs to be collected to be recycled.

Recycled plastic is a more cost effective and environmentally friendly alternative to virgin plastic and with responsible recycling from all consumers a positive contribution to better use of resources, more job creation and a cleaner environment can be achieved.

Ray is mapping out his next big adventure and it is sure to be another record setting, ground breaking achievement to show off the power of a mind made up and how, as a collective, we need to take much better care of our environment and water sources.

Error: An access token is required to request this resource.
Type: OAuthException
Solution: See here for how to solve this error
Tree-mendous adventure in Zambia

What happened at COP17?
Scroll to top