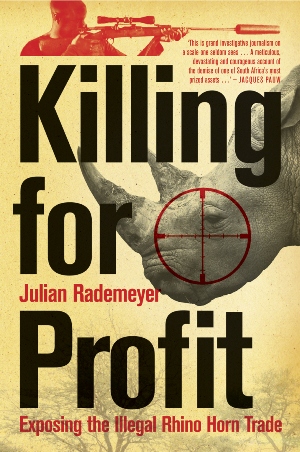 The rhino has survived on Earth for more than 50 million years. Yet man has fast driven these animals
to endangered species status. The black rhino especially is critically endangered while the white rhino’s
status is ‘near threatened’.

Killing for profit tells the story behind the stories about the Rhino horn trade – a trade that thrives on the fact that rhino horn is worth more than gold, heroin or cocaine in some areas of Southeast Asia.
Greed and corruption soon follow…

This will not be one of your ‘easier’ holiday reads, but it nevertheless a gripping tale – because
this is the real-life story about the criminal underworld and syndicates that confront those who
battle to save the rhino from extinction.

Author Julian Rademeyer is an award-winning investigative journalist with twenty years’ experience at major South African newspapers. He has reported from many strife-torn areas of the world and has painstakingly investigated the bloody trail of the front
line where rhinos are killed by organised poaching in Africa to those areas in Southeast where the
rhino horn trade is controlled by crime bosses.

If we want to be informed participants in discussions about how to protect our endangered species
that are poached and hunted for their body parts, then reading this book could be a good start.

Error: An access token is required to request this resource.
Type: OAuthException
Solution: See here for how to solve this error
Fresh Happy Tasty – Jane Coxwell Book Review: The Lost Crops Of Africa- Volumes I, II and III
Scroll to top